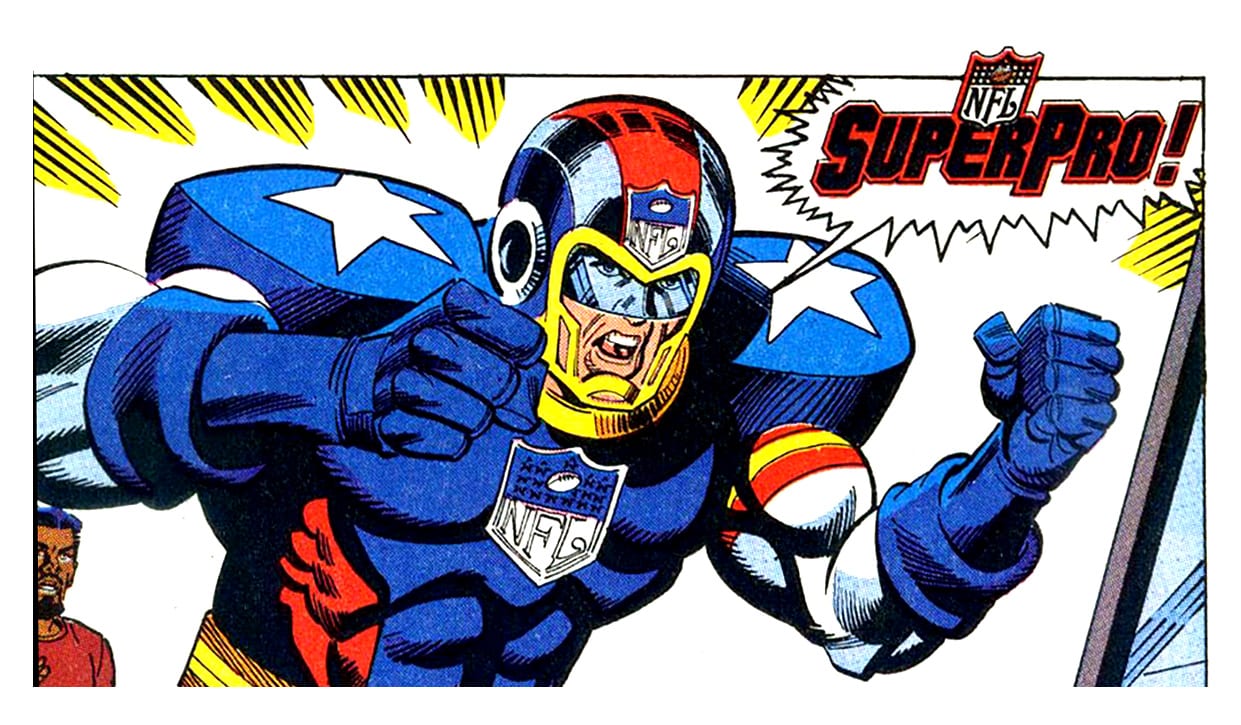 Comics are a business and sometimes a book is produced that seems more like an ad than a story. In 1991, Marvel Comics released NFL Superpro, a new series starring a former football player who gets super-powers and an indestructible football uniform and wow, wait, this was real? I remember reading this as a kid and I still find it hard to believe this was a real comic. But it was! Comics looked like they were having a boom in popularity and interest in the late 1980s and early 1990s, and the NFL wanted to take advantage of the situation. The series was made in collaboration with the NFL and Marvel Comics to promote various football and occasionally other sports such as basketball. So we not only got a football player-turned-superhero called Superpro, because that’s too generic. He was specifically called NFL Superpro.

Created and written by Fabien Nicieza, NFL Superpro is really Phil Grayfield, a former football player who becomes a sports journalist after injuries end his career on the field. One day, Grayfield is sent on assignment to interview Rudy Custer, a mega-rich and reclusive football fan who has created an indestructible football uniform complete with NFL insignia because… he’s also a scientist, I guess. Bad people then arrive to rob the place of its expensive football stuff. During the ensuing chaos, Phil Grayfield left for dead by the escaping thieves who set the place on fire.

But Custer’s home is also full of strange, scientific chemicals and other weird things, and the exposure to these things during the fire causes a “fantastic accident” that increases all of Phil’s physical talents. Phil then dons the super-football uniform and as NFL Superpro he brings the baddies to justice.

Following his first adventure, NFL Superpro seems to only encounter sports-related villains. There’s an old colleague who becomes the villain Quick Kick. There’s the guy who can manipulate time and calls himself Instant Replay. There were also team-ups. Spider-Man appeared in his first issue. He and Captain America teamed up against the villain Crossbones. Honestly, this series could have been a lot of fun. You could’ve played on satirizing and celebrating American football. NFL Superpro could have been as funny and adventurous as the movie SpaceJam promised to be. But like so many other movies and cartoons featuring US sports players, it just took itself too seriously without realizing how much its characters and dialogue undercut that same seriousness. It also sadly got into bad territory when issue #6 portrayed Hopi Native Americans in such an insulting way that it was pulled from shelves.

To this day, NFL Superpro is remembered with either giggles or groans. Since the licensing deal is done and gone, he can no longer appear in Marvel Comics and can’t even be referenced in past tense. It’s as if he never existed in the Marvel Universe. And perhaps that’s for the best!