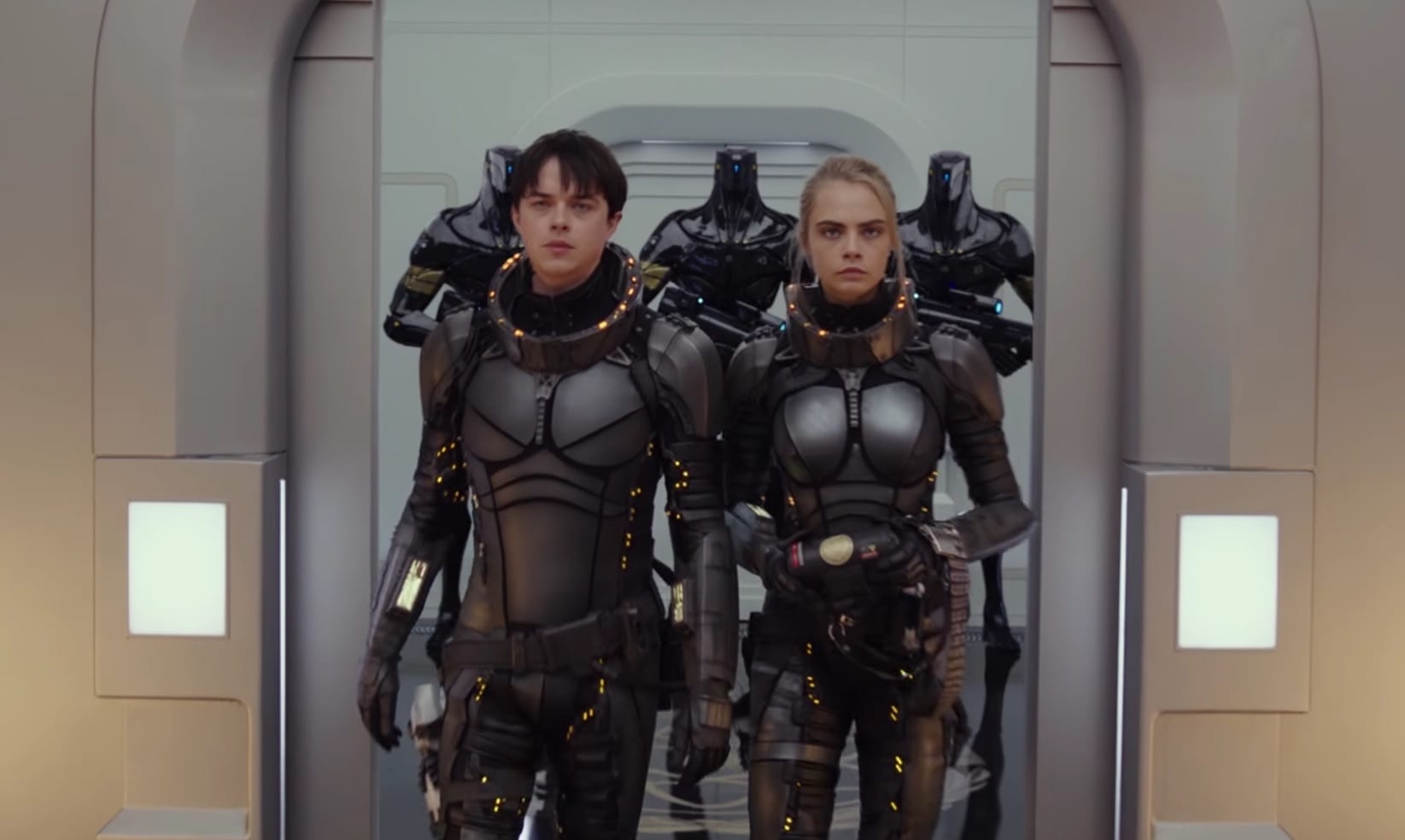 While summer is a time for big, tentpole movie franchises to unleash the latest superhero movie or a garbled Transformers cinematic stream of consciousness, there is not a lot of hard science fiction for us sci-fi nerds to geek out on. That is why I am excited for Valerian And The City Of A Thousand Planets being released on July 21st. The film, directed by Luc Besson and starring Dane DeHaan and Cara Delevingne is based on the classic, award-winning French comic series “Valérian and Laureline.”  What is so awesome about this is that it has been cited as the influence for several major sci-fi sagas including Star Wars and The Fifth Element (also directed by Besson.) First published in 1967, Valerian is finally getting its own big screen debut in 3D. The original comics agents follow Valerian and Laureline in the 28th century. Humanity lives in a near utopia with Galaxity, the capital of The Terran Galactic Empire on Earth ruling peacefully over a happy populace. However, given the ability to instantaneously travel through space and time the problem occurs of rouge time travelers messing up the space-time continuum (Great Scott!). Therefore, the Spatio-Temporal Service attempts to ensure that there are no temporal paradoxes that could cause real havoc.  Valerian and Lareline are two agents of this service. They are sort of like Galactic Temporal FBI agents, or you could say: The Men in Black.

Throughout the series, written by Pierre Christin and illustrated by Jean-Claude Mézières, it has had socially conscious political themes touching on a variety of topics with an overall vibe of good versus evil. With striking imagery, the series directly influenced George Lucas in his creation of Star Wars. This is evident in a number of ways including the overall premise of a man and woman traveling the galaxy to battle evil. More specifically Valerian and Laureline jump through space-time in their XB982 ship. Some have noted that the Han Solo’s Millennium Falcon has a striking resemblance to this ship.

Some might speculate that “a spaceship is a spaceship” – however, Star Wars’ homage to Valerian is present even in one of its most iconic scenes. In

the 1966 graphic novel: Valerian: World Without Stars, Laureline wears a gold-plated bikini outfit that influenced Princess Leia’s slave-girl outfit when she is captured by Jabba The Hutt.

In the Empire Strikes Back the famous scene of Han Solo trapped in carbonite is very similar to a scene in the graphic novel Empire of A Thousand Planets where Valerian is trapped in liquid plastic. The sad thing is that now, if filmmakers stayed true to the Valerian source material with these scenes, fans would be confused as to why they were referencing Star Wars and not vice versa.

Writer Pierre Christin is said to have been “dazzled, jealous and furious” after watching the original Star Wars film for the first time. Later, in 1983 when Return of The Jedi was released an edition of the Valerian comic even included a scene in which Valerian and Laureline meet Luke Skywalker and Princess Leia, with the jab; “You look familiar to us.” With Laureline responding; “Oh no, we have been here for years.” It wasn’t just the original trilogy that had the mark of Valerian; the Star Wars prequels still bore the influence, most notably with Episode II: Attack Of The Clones. In the 1977 Valerian comic On the False Earths an army of clones of Valarian is created.

Another great science fiction cult classic that Valerian inspired was The Fifth Element. This time, however, Valerian artist Jean-Claude Mézières was included in the production design of the film. This is evidenced by the iconic flying taxi that Bruce Willis’ character drives which is similar to the designs of flying cars which first appeared in  Valerian: The Circles of Power. So finally, Valerian and Laureline are going to get their due on the big screen; the trailer looks dazzling in 3D and the visuals seem to live up to the celebrated art of Mézières. The feature follows the agents as they travel to a giant city that features thousands of alien cultures from around galaxy all peacefully exchanging culture and knowledge. That alone is an expansive sci-fi concept that fill my yearning for good, hard science fiction. However, the action-packed trailer informs us that a dark force is threatening the city and the duo must race to figure out how to stop it to save the giant space colony and the universe… I’m in! Check back with us later in July for a full review of the film!