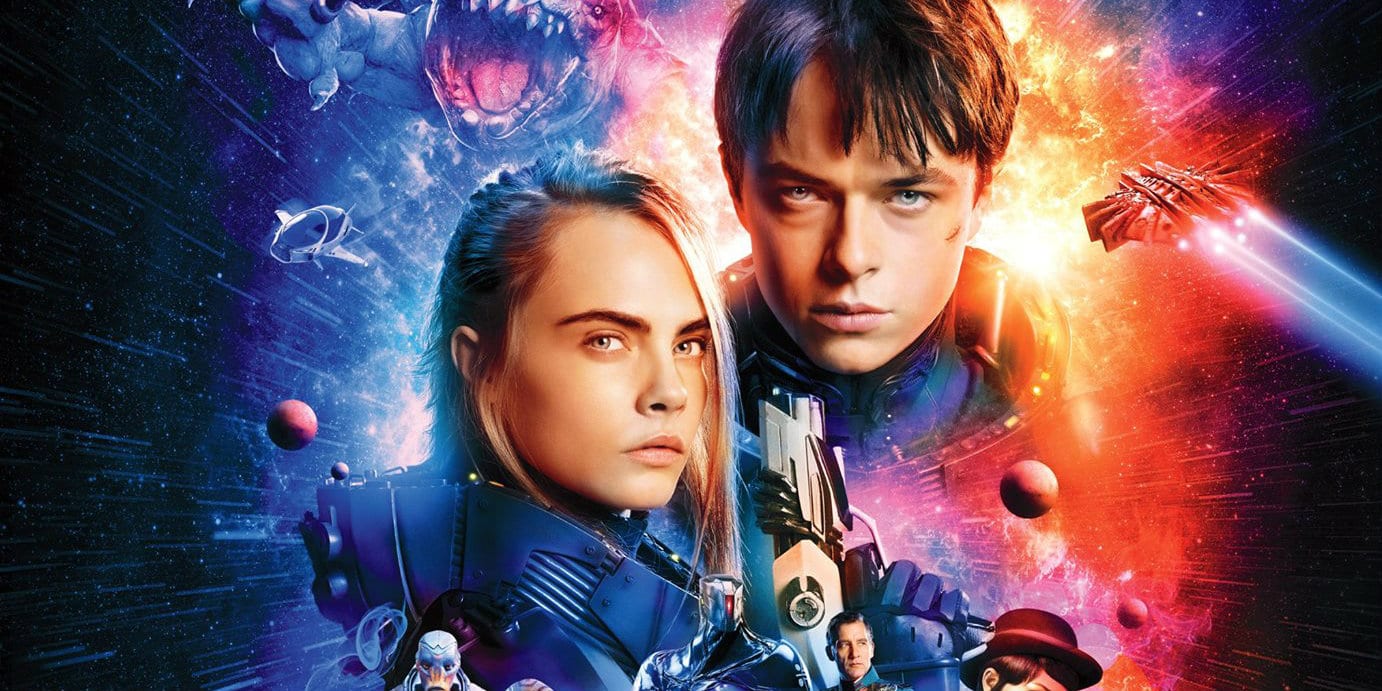 Valerian and the City of a Thousand Planets is hitting theaters nationwide on Friday, July 21st and it needs to be seen on the big screen in all its glorious three dimensions. If you are one of those people who likes to debate the merits of 3D in filmmaking, just bite your tongue and go see this one in 3D; you will be rewarded! The Luc Besson (The Fifth Element, Lucy) directed sci-fi action film stars Dane DeHaan as Valerian and Cara Delevingne as his crime fighting partner, Laureline. The film is based on the celebrated French comic book, “Valerian and Laureline” – first published in 1967 and is said to be the inspiration for Star Wars. You can read my previous recap of all the ways Valerian influenced Star Wars here.

I love good science fiction that is grounded in reality or at least connects to our world in some way. Valerian starts out with a montage that does this while delivering a message of hope and unity that is enough to make even the most dark hearted of us smile. The International Space Station that is floating above our heads right now will soon welcome scores of cultures from around Earth into space, as each nation develops their own space program. Then later down the road actual alien cultures will join humanity, constantly building onto the ever-growing space station until one day it is too big to be orbiting above Earth and must be moved into deep space where it will become a hub for thousands of different sentient creatures to exchange knowledge and ideas.  “The City of A Thousand Planets” is actually what the ISS has evolved into in the far future! How cool is that?

This reminds me of in Star Trek: The Motion Picture (SPOILER!) where the crew of the Enterprise learns that the alien entity threatening Earth is actually a Voyager space probe launched in the 20th century, but was found by a race of living machines that upgraded it to learn and become self-aware, returning to Earth as a giant cloud of energy and material. So with the backdrop of the ISS turned City of a Thousand Planets AKA “Alpha,” Valerian experiences a strange dream that was sent to him from an unknown source. In the dream we see the destruction of a planet of beautiful androgynous humanoids reminiscent of the Na’vi of Pandora.  Meanwhile Valerian is constantly hitting on his fellow agent, Laureline. He keeps begging her to marry him, although it’s not clear that they even have a romantic relationship to begin with; he jumps over first dates and right into marriage! While it is an enlightened time of learning and peace, apparently Valerian didn’t get the memo on workplace sexual harassment.

The extra dimensional fun is not just for those of us sitting in the theater, as in one of the best sequences early on in the film, Valerian is able to travel to and see a parallel dimension/ universe using a special helmet while also interacting with objects in this alternate reality via a “trans matter box.” Think of it like going into virtual reality, but the images he is seeing actually exist in another dimension. It is here in this alternate reality – intergalactic market bazaar that the pair are sent on a mission to retrieve a stolen object of important value to the Human Federation. This turns out to be an adorable creature that literally poops out crystals packed with incredible amounts of energy; the same creature that was seen in Valerian’s “dream.” Plus he is the last one of his kind, whoa! When Valerian and Laureline return to the Alpha station they have a new mission; find whoever or whatever has taken over the center of the station, causing a lethal amount of radiation to endanger the lives of the species aboard. From there the duo go on an adventure through the depths of the massive space station, interacting with a variety of inventive creatures including a sexy shape shifting alien entertainer played by pop star Rihanna. One thing viewers should ignore going into the movie is what was promised in the trailer. Sometimes in big Hollywood movies we are accustomed to seeing deleted scenes making the trailer as a way to not burn through material and have audience bored with the film by the time they get to the theater. However, with Valerian it seems that there is bit of a plot misdirection. I kept waiting for the plot point of the fate of the whole universe to be in jeopardy. Early trailers for the film clearly stated that Valerian and Laureline have two hours to save the universe. At no point in the story was the entire universe in peril. So just go into the film clearheaded and without any previous story expectations and you will be much happier.

Dane DeeHaan might not be the first name you think of for the lead role in an action adventure film. My familiarity with him was from his role in the ill-fated Metallica concert film narrative Through The Never. However, as Valerian he channels his inner Keanu Reeves, delivering his dialogue in a bro-ish sort of way that while I’m not positive this is what the filmmakers were going for, works comically. With stunning visuals of planetary landscapes, the depths of space and alien creatures, Valerian is reminiscent of the feeling of awe, audiences felt when first viewing Avatar almost a decade ago. I was reminded why 3D films “should be a thing.” However, like Avatar the visuals do much to make up for what the acting and storytelling may lack. Hopefully though audiences will get behind this movie so we get to see more of this unique world that may still have much to offer science fiction fans. Have you seen Valerian and The City of A Thousand Planets? What did you think?