THE TRANSFIGURATION Chews Up The Vampire Genre and Spits It Out 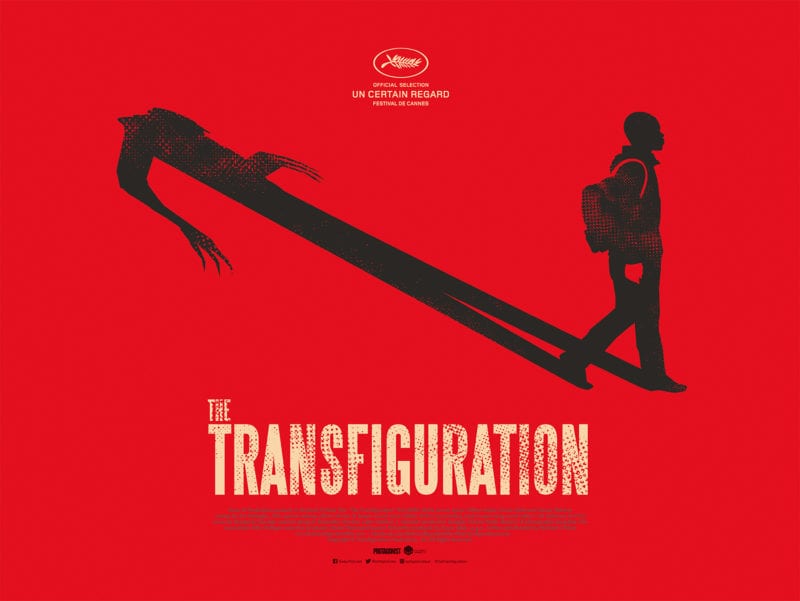 Writer- director Michael O’Shea’s first feature The Transfiguration is an independent vampire film that’s bloody good. Coming to Blu-ray and VOD on August 8th it was a selection at the Cannes Film Festival last year before having a small theatrical run in the US. Hopefully wider audiences will now have a chance to check out this much-needed transfusion to the horror genre. We follow the story of a young teenager named Milo (Eric Ruffin) who is troubled, to say the least. After the suicide of his mother, Milo lives with his adult brother who seems to never leave the couch, in a rundown high-rise housing development in Brooklyn. This location begs the question: Why should anyone be frightened of ghosts or vampires when the monsters that hunt in the brutal, urban backdrop of New York City are all too real?

A quiet loner, Milo has a pretty bleak existence. He meets with a counselor to discuss his violent tendencies, which unbeknownst to authorities come in the form of snacking on a man in the subway restroom and drinking his blood. Bullied at school, the street gang that lives in Milio’s tenement also taunts him as he walks home every day.  So, when not indulging in his growing hunger for human plasma or watching grotesque nature videos on the internet, Milo escapes from the hell around him by obsessing over vampire lore. He is even writing his own vampire book, “The Rules For Hunting.”

A happy reprieve from all of this is when he meets Sophie (Chloe Levine), a girl his age in his building, and he discovers that she has been through her own traumas. An orphan, she lives with her abusive grandfather, has sex for money with groups of guys, and cuts herself to deal with it all. Milo doesn’t mind and wants to see her scars. This is an overarching theme of the film: the brutality of life verses the fiction we create and how the two can blur together sometimes. In a similar vein as The Babadook, the film builds a world in which the audiences may be questioning the reality that unfolds. Is Milo really a supernatural vampire or is it all in his head?

The two misfit kids get to know each other and Sophie reveals she even digs vampires as well. The Twilight books are pretty great! Milo asserts, as he explains to Sophie, that vampires in real life are definitely not the way they are presented in the movies or television. The scene actually reminds me of a great book I read, Ted Bundy: Confessions with a Killer. In the book, the iconic serial killer was interviewed while on death row and still trying to maintain his innocence and stave off execution. However, in order to tell the story of what really happened to his victims he spoke to interviewers in the third person, creepily giving every detail of their demise. In this way, Milo tells Sophie his beliefs on what real life vampires might be like, essentially telling her how he feels when he drinks blood and hunts at night without her knowing it.

The last X-Men franchise movie, Logan, opens with a gang of car thieves messing with the wrong driver as they attempt to jack Wolverine’s car, only to be disemboweled. Milo must deal with the violent gang in his building in a different manner, and tension and slow build to that conclusion is worth the wait while Milo deals with his own demons in a unique and selfless way. Like he said, vampires are not like the ones in the movies – at least in this movie!

Clearly O’Shea loves vampire films and series, and Transfiguration serves as an ode to those who have come before, even if in doing so, it turns the genre on its head. If you don’t mind a horror film that goes for the head and the heart, but not necessarily the gore, this is an enjoyable serving of vampire cinema.