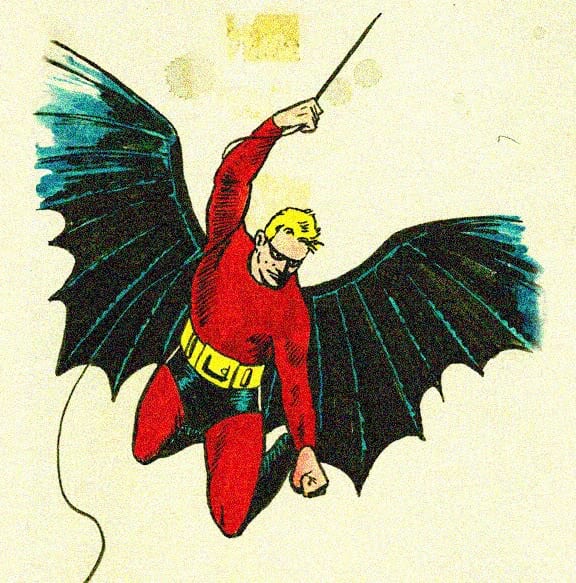 Today would have been the 103rd birthday of Bill Finger. Today, many folks still don’t know the contributions of Finger to the US comic book industry and superheroes. Finger wrote and contributed to many characters stories during the Golden Age of Comics. With Martin Nodell, he co-created Alan Scott, the original Green Lantern. But most significantly, he co-created Batman, making him a character who has endured to this day. And he was recognized for this far too late. In 1939, Bob Kane conceived of a vigilante called Batman, or originally “the Bat-Man,” who would fight crime, but he was not a writer. What’s more, his initial concept for the Bat-Man was more of an everyman brawler in his crimefighting, a man who wore a red outfit, a simple domino mask (like what Robin wore later), and had not a cape but two stiff glider-like bat-wings attached to his costume. The Bat-Man was loosely inspired by Leonardo Da Vinci’s drawings of flying machines, pulp vigilantes such as the Shadow and Zorro, and a movie called The Bat Whispers (a remake of The Bat) featuring a villain in a bat-mask who occasionally announced his presence by shining a flashlight that projected a bat silhouette on the walls.

Bob Kane took this idea to Bill Finger, whom he’d hired before to be his collaborator and ghost writer. It was Finger who said that the stiff bat wings should look like a cloak when Batman isn’t leaping off a building. Finger altered the color scheme so that Batman would have a gray bodysuit and have a symbol on his chest like Superman. Finger replaced the mask with a horned howl and decided to make the eyes white and blank, taking direct inspiration from the comic strip character the Phantom. Finger decided that this character would not just be a brawler but also a detective, someone who was “a combination of Douglas Fairbanks and Sherlock Holmes.” It was Finger and artist Jerry Robinson who both decided later that Batman should have a young partner named Robin. Bruce Wayne (named for the historical figures Robert the Bruce and “Mad Anthony” Wayne) would have been a very different, less visually interesting, and likely short-lived character without the contributions of Bill Finger. Bill Finger wrote the original stories that developed him, including the later origin story of losing his parents to a mugger. Bill Finger was the one who decided to call Batman’s home Gotham City, who imagined that he would be friends with a character called Commissioner Jim Gordon, and who thought the character needed a “Batmobile.” But many didn’t realize the weight of his contributions for years. Bob Kane approached DC Comics about Batman without Finger present, and did the paperwork concerning the character rights without him. Bob Kane was a businessman who made sure his signature was seen on Batman comics for years, even ones he didn’t draw, whereas Finger had no visible credit. Movies, cartoons and other media were required to have the credit “Batman created by Bob Kane,” but Bob made no deal to ensure that Finger would be similarly acknowledged. When asked about this later, Kane simply said that he’d hired Finger as a ghost writer and, as such, the man shouldn’t have expected credit. Only after Finger’s death did Bob Kane start to acknowledge that the man had been the co-creator of one of the most enduring American characters and franchises.

Today, more and more people recognize the contributions of Bill Finger, a man who was not perfect and had his clashes with editors and employers due to his occasional habit of turning in work late, but who none the less changed the face of American superheroes and influenced so much that came later. The Bill Finger award is given bi-annually to creators in the comic book industry who are not properly recognized until later, acknowledging that the situation with Finger was not and is not unique. So remember this guy and all he did. And remember to give credit where it’s due.