Recommended: “We3” by Grant Morrison and Frank Quitely 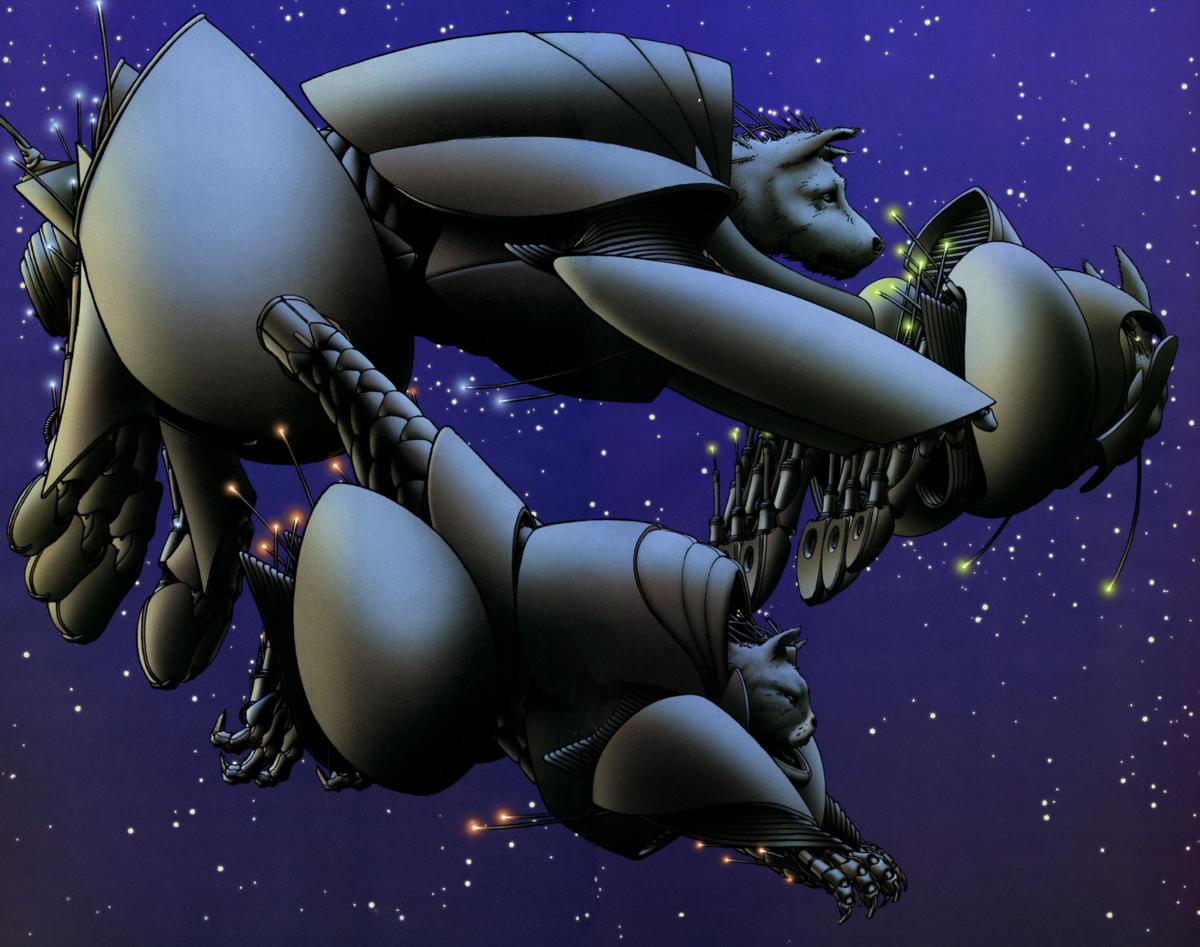 In 2004, just before they collaborated on the critically acclaimed All-Star Superman, writer Grant Morrison and artist Frank Quitely published the three issue science fiction drama We3 through the Vertigo imprint of DC Comics. This is not a world of superheroes but of animal experimentation taking to a horrifying extreme by a turning three kidnapped pets into living weapons. An outspoken critic of animal cruelty and experimentation, Morrison crafts a story in We3 where the protagonists neither speak nor think like human beings. 1, 2 and 3 are a dog, cat and rabbit respectively that have been hooked into armored suits that grant enhanced physical abilities and other features. Skull implants and special treatments allow them some enhanced intelligence and the ability to speak. But they’re still animals and think like animals, so you won’t see the dog having a full, human conversation with the cat as if you were watching a Disney film. For instance, when 1 and 2 talk, this is how one of their conversations go: If you’re having trouble with that, the dialogue would translate to human slang as “I’m going to get 3 and then get home. 2, come on!” Whereas 2 responds, “Home? You talk about home, 1, but you know nothing. What is home even?” That would be the easiest way to show them communicating, but with the dialogue he uses instead, Morrison reminds us at every instance that these are animals, creatures that are simpler and more innocent than us, creatures worthy of care and compassion rather than turning them into tools of death.

After seeing how deadly the three armored pets can be in combat, the story really kicks off when the military decides to the animals will be “decommissioned.” But the scientist who helped train them can’t bring herself to simply watch them die. She warns the three and they escape. The story then follows them, on the run from a military that wishes to destroy them before they are discovered and someone will have to be held accountable for what was done to them and what they have done.

It’s a classic fugitive-style story, heroes on the run, but in this case it’s not quite as simple as that. As we see the three come across civilians during their journey, it becomes clear that they really are too dangerous in their current forms to be left unchecked. But that doesn’t mean you want the military executing them either. It makes the situation dangerous and thrilling on all sides, and all the more tragic since the three former pets never asked for any of this and couldn’t have consented with any understanding of the situation. Frank Quitely’s beautiful artwork delivers this story in a bold and dramatic way. With a style he calls “Western manga,” he is able to give fantastic, strange, frenetic battle scenes along with quiet, slower paced, reflective scenes. He uses masterful pacing and Morrison knows when to pull back on the words and just let Quitely’s art tell the story by itself. Every chapter of this story just underlines what a great collaborative pair they are.

We3 is violent and rough at times, particularly if you’re triggered by bloodshed and animals in danger or being injured. But it is a rich, satisfying science fiction thriller. You can find it in trade on sites such as Amazon and Comixology.