Recommended: I AM LEGEND by Richard Matheson 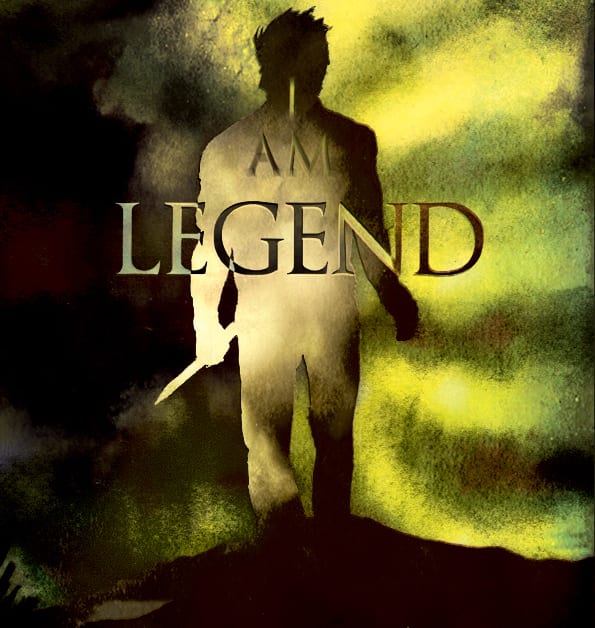 These days, it’s not unusual for movies, books and TV to reimagine the vampire myth into scientific or sci-fi terms. Marvel did it with Morbius, the “living vampire,” who was not an undead and cursed creature but a scientist whose experiments mutated him into a vampire-like creature. Dark Shadows occasionally delved into the idea that vampirism is a supernatural condition but can be countered with scientific resources and methods. The TV show Forever Knight had a medical examiner explain vampirism as a virus that was fed by continued blood ingestion, whereas sunbathing treatments, prohibition of blood drinking, and eating a diet more in line with what a human being would eat, would all weaken the symptoms and allow the person to become more human over time. Some stories have likened it to an STD or a Rabies-like disease. But the idea of looking at vampires through a medical lens truly started with the 1954 book I am Legend by Richard Matheson. Even if you’ve never read Matheson’s stories, you’re probably aware of or have encountered his work in other media. He wrote for The Twlight Zone and his stories inspired films such as What Dreams May Come, Stir of Echoes, and Real Steel. His novel I am Legend inspired both adaptations of the same title and other films that tweaked both concept and title, such as Night of the Living Dead, The Omega Man and The Last Man on Earth. He has had a huge influence across sci-fi, fantasy and horror, and this particular novel, which is very different from the movies based on it, remains one of his best.

The novel follows a man named Robert Neville, who lives in the remains of Los Angeles and is apparently the sole survivor of a world-wide epidemic of vampirism. Vampires exist everywhere. Each night, several vampires gather outside his home and try to get in. Every morning, as they sleep, he re-fortifies his home, checks his weapons and resources, makes more of what he needs, kills sleeping vampires in his neighborhood and the surrounding area, sleeps a bit, and then goes through another night of hearing vampires outside his home trying to get in. Or worse, trying to convince him to come outside.

These are not vampires of the Dracula or Barnabas Collins ilk, where they have full human intelligence and can be quite cunning, using trickery or complex plans to accomplish their goals. They do not summon wolves, rats or bats to do their bidding, and they do not hypnotize their prey. These vampire are just a couple levels above a zombie. They are stronger than a human would be and can sustain injuries that humans can’t, but they aren’t about to lift a car over their heads or bend steel in their hands. They seem to have basic human intelligence, but they’re so driven by blood lust that their thinking doesn’t get more complex than surviving, pursuing blood and demanding blood.

This doesn’t make the vampires any less scary. None of them are on the threat level of Dracula, but there are so many of them that you understands the horror of Neville’s nights. So many are outside, surrounding the house. Those who were neighbors call out his name in fury. Some of the women vampires call to him and offer promises of sex, hoping to lure their food out into the open. All of this, added with Neville’s complete isolation, make it a horrifying situation to contemplate.

Matheson does a great job of keeping the book interesting despite mainly following one character. There are flashbacks to Neville’s life when the disease is spreading, and the major thrust of the story is that he now wants to be proactive. Alone and with little hope that his situation will change, Neville does not give into despair and give up. He chooses instead to understand more. What causes vampirism? Why is he seemingly immune to this change? What even is vampirism really? Why do some things hurt a vampire more than others? Why on Earth do some fear religious symbols?

By making these questions and their possible answers a part of Neville’s quest rather than just information being relayed by someone like Van Helsing, Matheson avoids the book feeling like it’s too heavy with exposition. This is also helped by how much we are inside Neville’s head and emotions, despite having the story narrated to us in third person. Matheson plays with suspense and expectation. The discovery that there might be a living dog in the neighborhood is a heartbreaking thread of hope, while Neville simply looking at his watch and realizing it is much later in the day than he thought becomes a source of terror for the reader.

The book shifts greatly when Neville discovers another possible survivor. Is this truly a human being who, like him, is immune? Or is this vampire just more clever, able to hide its true nature?

Whether you’re a vampire fan or just a fan of suspense stories, check out I am Legend!