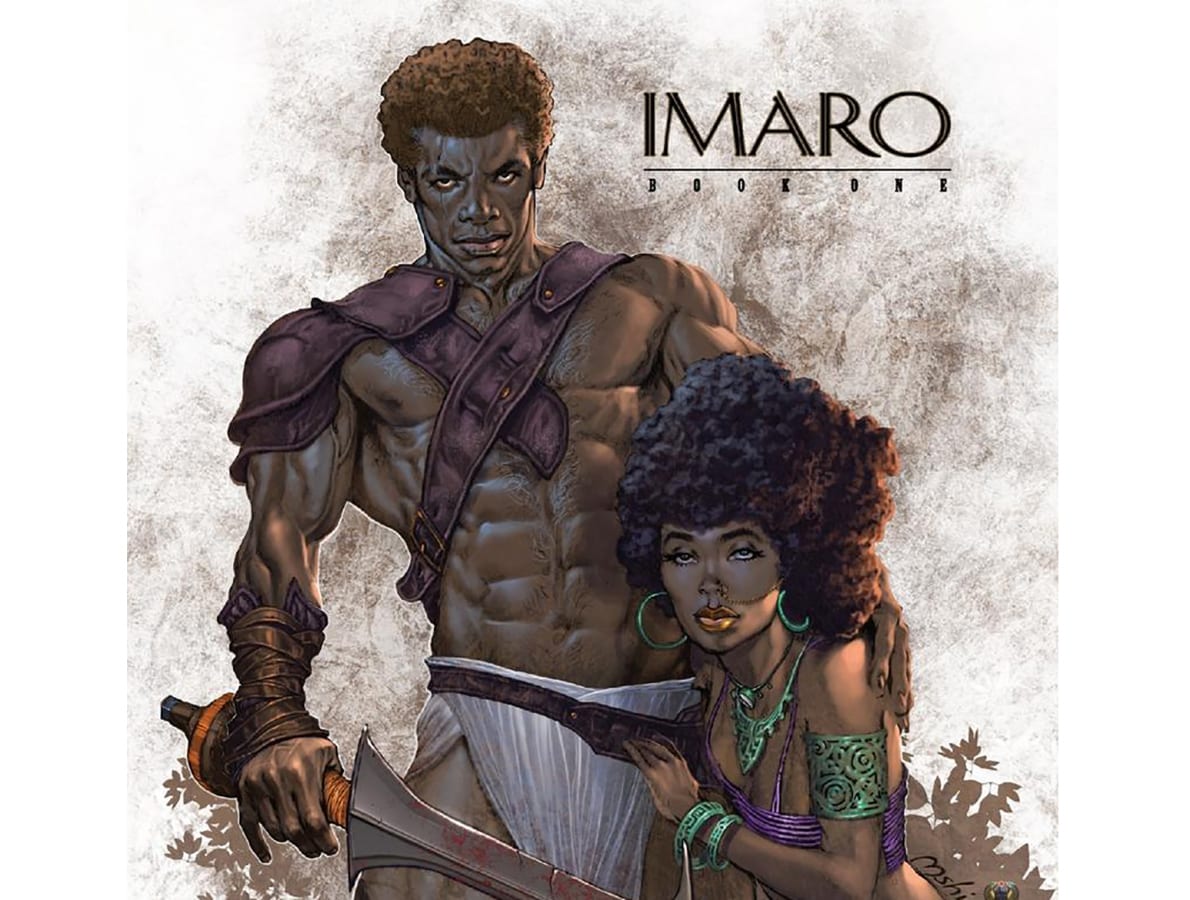 During the 1970s, Charles Saunders wrote a series of stories featuring a warrior in a fictional land called Nyumbani that is not unlike Africa, a place where magic is very real. The hero, Imaro, was described by some as “a black Tarzan,” though noticeably lacking of the “great white hope” or “white savior” tropes that can be found in the works of Edgar Rice Burroughs, and possessing a somewhat more relatable upbringing. Imaro’s stories were collected in 1981 in the book Imaro, which was recently republished in 2006 and now has an audio book narrated by Mirron Willis that be found on Audible.com as well! So who is this guy and what’s his deal? Here are the basics. The story begins when Imaro’s mother Katisa is exiled by her tribe, the Illyassai. She fathered a child with a man from another tribe. While this is allowed of men who capture women from other tribes and/or take them as wives, it is not allowed for women of the Illyassai. She leaves behind her son Imaro to be raised by her people, telling them that she leaves them a warrior. Imaro grows up and eventually proves her to be right. Through various points of his life, he undergoes intense struggles, fighting sorcerers, hidden enemies, and his own people. Fortunately for Imaro, he is blessed not only with incredible strength but also cunning and a maturity that allows him (usually) to understand when it is time to strike and when he needs to have patience.

While Tarzan was raised by apes and only had one real rival among that adopted family. He was seen as strange and a curiosity for many years, but how else would we expect animals to act when one among them is a different species? Of course, this upbringing requires a great deal of disbelief to be suspended. The longer you think about it, the more the idea of apes raising a human and the human in question being able to survive such an experience all just falls apart.

On the flipside, Imaro’s upbringing is something we can connect with more easily. Imaro is judged by his mother’s “crime,” often referred to even by adults as “Son of No Father.” He is punished for an act he had no ability to change or weigh in on, the circumstances of his own birth. Such a thing has happened in all human societies across time. We have all either seen or experienced being judged by who are parents are or who one parent is or by what a parent has done. It is unfair, but very human. Imaro repeatedly tries to prove himself worthy of the tribe and often exceeds expectation, but this only creates more resentment in some rather than acceptance. Even those who accept him, we learn, are quick to later condemn him because it is easier to believe he is secretly a coward or a villain than for their pride to concede that a person of mixed heritage could be just as good or perhaps superior to the rest of the tribe. Interestingly, the people who perhaps respect Imaro the most and accept his full prowess are his enemies, who each reach the conclusion that his mixed heritage makes him “more” than the average Illyasai rather than less.

Imaro is a very human hero. He has great fighting prowess and cunning, but he is prone to anger and suspicion. After being seemingly betrayed, he expects betrayal again and practically looks for a reason to conclude that it has happened. He resents the enemies he has in the tribe, but also longs for even their approval. He just wants to belong, but by the time he seems able to reach this acceptance, he wonders what it is even worth to him if it comes from people who mistreated him for years and often looked for an excuse to judge him further. Mixed in with the sword, sorcery and exaggerated drama, this is a very relatable hero and one who should be experienced by more people. Check it out and then follow it up with the next book Imaro 2!