Nerd 101: The Alternate Versions of Doctor Who 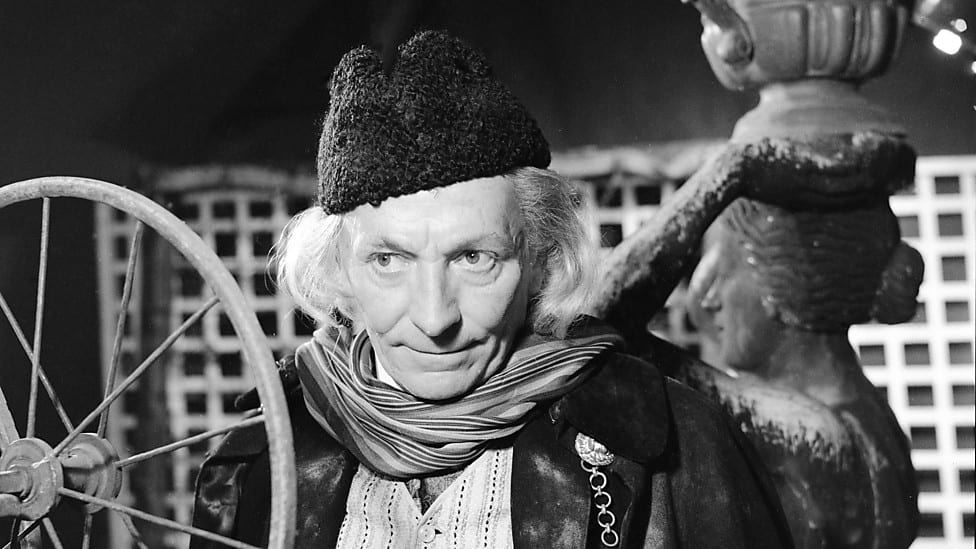 Introduced in 1963 on the television series Doctor Who, the man who prefers to only be known as “the Doctor” is a heroic (though very flawed and sometimes harsh) scientist/adventurer from the planet Gallifrey, a renegade member of the society of Time Lords. Along with incredible alien intelligence, the Doctor has the power to regenerate his form when he’s growing old or suffering a fatal injury, giving him a new body and a new perspective on life. This allowed there to be many Doctors during the original classic show’s 26 seasons, followed by yet more versions of the hero when the new Doctor Who series began in 2005.

But what about the out-of-continuity versions of the Doctor who appeared in certain special stories? What about incarnations from possible futures and alternate timelines and reboots that never happened? For the curious, here’s a look at all those interesting alternative takes.

DR. WHO AT THE MOVIES

Before he played Grand Moff Tarkin in Star Wars, Peter Cushing played an Earthborn version of the hero in the 1965 theatrical film Dr. Who and the Daleks and its 1966 sequel Daleks – Invasion Earth: 2150 AD. Both of these films were adaptations of the first two Dalek stories from the Doctor Who TV program. He wasn’t an alien man called “the Doctor” from the planet Gallifrey, but a human British scientist from London who was literally named Dr. Who (I like to imagine his first name was something akin to Phineas, Curtis or Ichabod). He traveled in a time machine of his own creation that he named Tardis (as opposed to “the TARDIS”).

While the TV version of the Doctor wore anachronistic clothing, looking as if he belonged to the 19th century despite living in a futuristic spaceship, Cushing’s Dr. Who  looked like a typical and contemporary old-fashioned British academic of the 1960s. The TV version initially traveled with his granddaughter Susan and then picked up travelers Ian Chesterton and Barbara Wright. Cushing’s Dr. Who had two granddaughters, Barbara and Susan, and Ian was Barbara’s boyfriend rather than a friend and colleague.

Obviously, these two films and its version of the time traveling hero exist outside of the canon and continuity of the TV series. But Peter Cushing later suggested a way to consider them canon after all. In the TV series, one of the Doctor’s enemies was a cosmic trickster known as the Celestial Toymaker who enjoyed forcing people to play strange games and scenarios. Cushing proposed that he played a future version of the Doctor who is captured by the Toymaker and forced to live out alternate versions of his early adventures. Not a bad idea, actually!

THE VALEYARD – AKA THE EVIL DOCTOR!

In the mid 1980s, BBC Controller Michael Grade canceled Doctor Who, arguing it was embarrassing and that straightforward science fiction was a genre for America, whereas British television was better suited to satirical science fiction or straightforward dramas. Fan outcry led to the BBC bringing back Doctor Who after a year and a half, but Michael Grade warned producer John Nathan-Turner and script editor Eric Saward that the show was still on thin ice.

To symbolize this pressure, Doctor Who returned with a season-long story arc “The Trial of a Time Lord.” For the third time since the classic program began, the Doctor is put on trial by his people the Time Lords and facing possible execution. Michael Jayston played a black-clad, court official referred to as the Valeyard (an old Gallifreyan term for “prosecutor”).

The original intention was to reveal the Valeyard as a corrupt, future version of the Doctor in his thirteenth incarnation, but Producer Nathan-Turner later decided to change this. In the version that aired, the Master appears in the penultimate chapter of “The Trial of a Time Lord” and reveals that the Valeyard is the Doctor’s dark side, somehow given physical form in a possible future, his creation occurring between the Doctor’s future twelfth and his later final incarnation.

The Valeyard was defeated at the end of the season (though he did survive the experience) and never showed up again. The officially licensed Big Finish Productions audio drama The Trial of the Valeyard brought back the villain. In the story, the Valeyard claimed he was created by the Thirteenth Doctor’s experiment to break the thirteen life limit. The Sixth Doctor believed this was a lie, but admitted there might be some sliver of truth hidden in the story. Fans then learned how the villain met his ultimate end in Big Finish’s four-part Sixth Doctor special mini-series The Last Adventure.

In the 2010 Doctor Who TV episode “Amy’s Choice,” the Eleventh Doctor encountered a manifestation of his darker nature, a being dressed in attire similar to his own. Some wondered if this was the beginning of a new version of the Valeyard. Who knows…

In 1996, the Fox network (in association with BBC Worldwide) aired the Doctor Who TV-movie that introduced Paul McGann as the Eighth Doctor. Though it did well in the UK, the US numbers weren’t good enough for Fox, and a new series did not materialize until the BBC brought Doctor Who back in 2005.

The TV-movie continued the continuity of the classic Doctor Who series that aired from 1963 to 1989, but that wasn’t always the plan. Originally, the TV-movie was going to serve as a pilot for a Doctor Who reboot, under the possible titles The Chronicles of Doctor Who? or simply Doctor Who? with a question mark now in the title.

In the series bible, this reboot version of the Doctor is heir to the royal line of Gallifrey and a threat to its current ruler, his half-brother the Master. The Master sends his deadly minions, the Daleks (spider-legged in this version), to kill the Doctor. This prompts the hero to leave Gallifrey and go on a quest to find his missing father Ulysses (known on Earth as Blackbeard the Pirate). In this reboot, the TARDIS only has five rooms, houses a pumpkin-shaped alien named Gog, and its circuits are inhabited by the ghost of the Doctor’s grandfather Barusa (who was a teacher, not a relative, in the classic Doctor Who series).

The series bible describes the proposed reboot Doctor as a ruggedly handsome, unshaven character who smokes cigars and wears a long leather duster decorated by many buckles and pockets. What a strange and different Doctor this would have been.

Following the TV-movie, the Eighth Doctor starred in novels, the regular comic strip stories of Doctor Who Magazine, different series published by Titan Comics, and audio plays starring Paul McGann by Big Finish Productions that continue to this day. In 1998, when it didn’t look like there was going to be a new Doctor Who series on television, Doctor Who Magazine decided to test if the readers were averse to having the hero regenerate again in the comic continuity.

In the story “Wormwood,” the Eighth Doctor fakes his own regeneration and has a friend masquerade as the new Ninth Doctor. This is part of a plan to distract some villains while the real Doctor does what he needs to do to save the day, but for a short while readers wondered if in fact Doctor Who Magazine hadn’t decided to just create its own new version of the hero.

The false Ninth Doctor was based on Nicholas Briggs, who is famous of course for being the voice of the Daleks, Ice Warriors and Cybermen in the modern era, and who is one of the spearheads behind the Doctor Who audio dramas for Big Finish Productions. He also played a possible future incarnation of the Doctor in unlicensed dramas produced by Audio Visuals.

In 2003, fans celebrated the 40th anniversary of Doctor Who and lamented that the BBC still seemed unable or unwilling to bring the show back to TV. It was decided that a new animated series streaming online would serve as the official continuation of the Doctor’s adventures. Richard E. Grant was cast to play the voice and the BBC acknowledged him as the official Ninth Doctor. Grant’s incarnation then appeared in the animated adventure “Scream of the Shalka,” written by Paul Cornell and featuring Sir Derek Jacobi as the Doctor’s former enemy and now reluctant companion the Master. “Scream of the Shalka” also included a small voice role for David Tennant, who asked if he could be included because he was such a fan of Doctor Who. Years later, Tennant would play the Tenth Doctor.

This was a very acerbic Doctor who felt inconvenienced at having to save Earth yet again and made sure everyone knew it. The idea was “Sherlock Holmes in space.” This version of the Doctor wore a black Edwardian tailcoat under a heavy cape, with a Keble College scarf thrown over his shoulder. It made him look a little vampiric.

In the end, the “Shalka Doctor” or “REG Doctor” only had one animated adventure, “Scream of the Shalka.” When the BBC greenlit showrunner Russell T. Davies to revive Doctor Who for TV, the online animated series halted and was retroactively deemed out of continuity. The Shalka Doctor then appeared in a short story called The Feast of the Stone.

In 2003, during the 40th anniversary of Doctor Who, Big Finish Productions released several audio adventures under the banner Doctor Who Unbound. Each of these plays was a separate one-off story that existed in its own continuity, outside of the canon of the TV series, and featured actors who had never played the Doctor. Some of the stories tackled very specific “what if” scenarios. What if the Doctor had never left Gallifrey with his young granddaughter Susan? What if the Valeyard had won all those years ago?

Some of these versions of the Doctor were played by Geoffrey Bayldon, David Collings and Sir Derek Jacobi. Arabella Weir (who later appeared in the 2011 Doctor Who Christmas Special) starred in the comedy story Exile as a female incarnation of the Doctor living incognito as supermarket employee “Susan Foreman.” David Warner appeared as a white-haired Doctor with mutton chops in the audio dramas Sympathy for the Devil (2003). His incarnation was popular enough to return for a sequel story Masters of War (2008) and then recently appeared again in the Doctor Who audio spin-off series Bernice Summerfield. In the Doctor Who 50th anniversary special, the Eleventh Doctor (played by Matt Smith) sits in a museum and muses that one day, when he’s ready to retire, he might choose to spend his final days as the curator of a museum. Perhaps, he might even be the curator of this very museum he’s sitting in. At this moment, he realizes that he is sitting next to a future version of himself who has done just that, a future incarnation who no longer calls himself the Doctor and has learned to control his regenerations so he can visit faces he’s worn before (“old favorites”).

The Curator was played by Tom Baker, who is among the most famous people who have played the Doctor before. He played the Fourth Doctor for seven years, becoming the quintessential version for multiple generations, known for his wild hair, long scarf, and bizarre personality. The character of the Curator had already made an appearance in Summer Falls, an ebook that in-universe was written by the Eleventh Doctor’s former companion Amy Pond. This implies that Amy also met the Curator at some point and knew that he was a later version of her friend the Doctor.

Next year, we’ll all get to see the return of Doctor Who with Peter Capaldi as the Twelfth Doctor, along with a new companion and new showrunner. Time will tell what happens next!