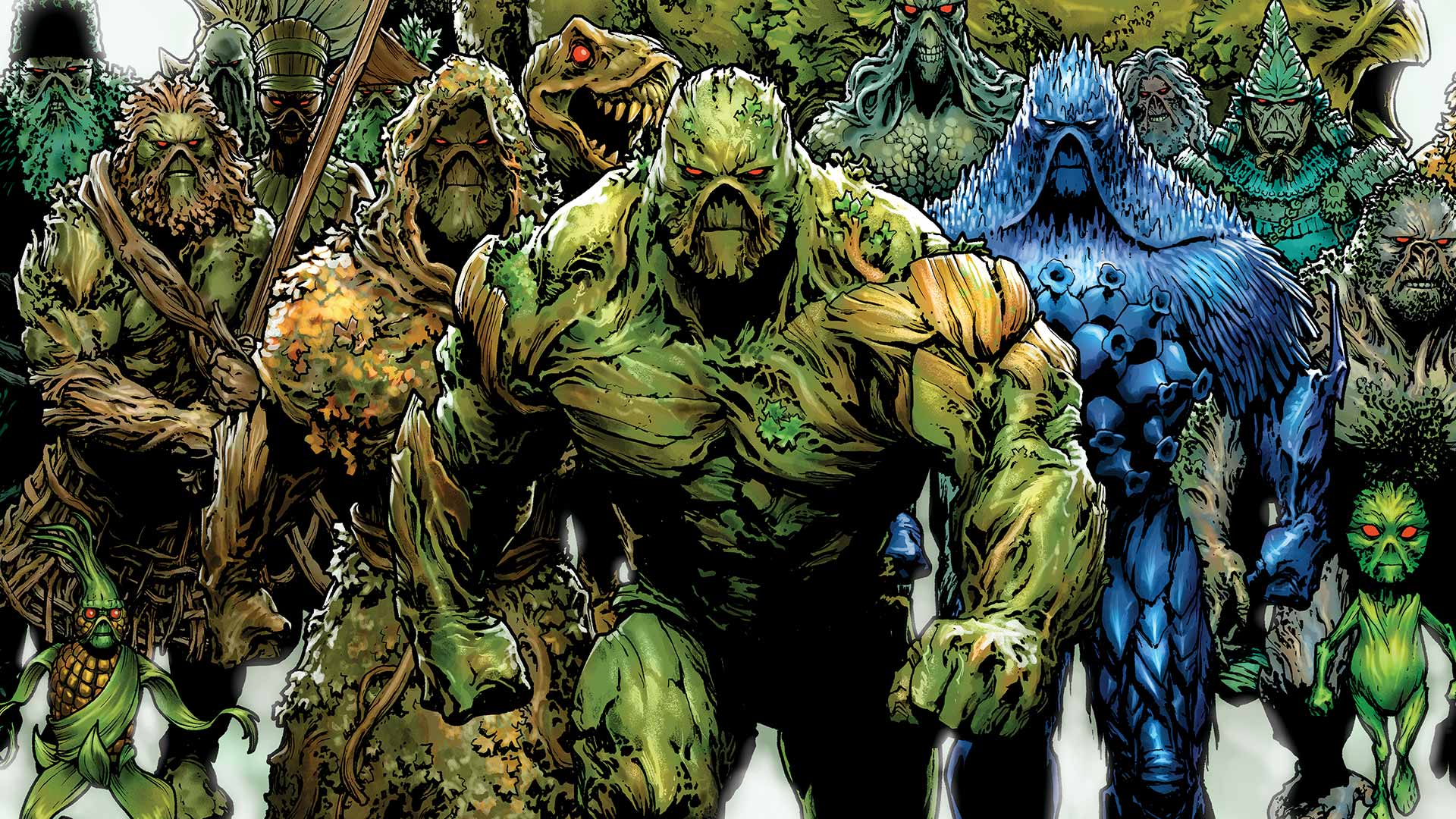 DC has the Swamp Thing. Marvel has the Man-Thing. There’s also a creature called the Heap who’s appeared in different incarnations across publishers. But where did all these muck monsters come from? What’s the difference between them and where did it start?

The answer to that seems to be the short story “It!” by Theodore Sturgeon, who also wrote “Baby is Three,” a short story about superhumans who bond into a gestalt being, which was later expanded in to the famous and award-winning book More Than Human. In 1940, Sturgeon published his story “It!” in the anthology magazine Unknown. The story features a monster made of muck and plant matter. It terrorizes the local area, first killing plants, then animals before attacking humans. In the end, the creature is defeated by being lured into rushing water that washes aways the plant matter of its body. At this point, a human skeleton is revealed. The creature was somehow created when plant matter fused with the remains of a dead man named Robert Kirk.

This story, considered one of the “most unforgettable” that Unknown published, evidently inspired the creation of the Heap less than two years later. From that character later came Swamp Thing and the Man-Thing. So let’s take a look at these strange creatures. Air Fighters Comics #3, published by Hillman Periodicals, introduced the Heap in 1942. Created by Harry Stein and Mort Leav, the Heap begins life as World War I fighting ace Baron Eric von Emmelman who is shot down and crashes into a swamp in Poland. Through sheer willpower (and, as is later revealed, the intervention of mystic forces), Emmelman rises from certain death many years later, his remains now fused to the swamp stuff he died in. This walking, mute heap of marshland muck fights an Allied Forces pilot SkyWolf before then turning against the Nazis. The Heap then had some wandering adventures, often judged immediately as a monster even by those it wanted to help.

The Heap didn’t live past the Golden Age of Comics really, but the character was revived in the 1970s in a few stories published by Skywald. This version is named Jim Roberts, a pilot who crashes his crop duster into a military toxic waste dump and winds up being mutated by the experience. In 1986, Eclipse Comics produced new stories of the Emmelman incarnation of the Heap before it went bankrupt in the 1990s. Todd McFarlane’s Spawn comic book series then introduced its own Heap character, a murdered homeless man named Eddie Beckett whose body is exposed to “necroplasm,” a Hell-born substance that fuses his corpse with the earth and trash around him, reanimating him as a monster.

Created by Alfred Bester and introduced in 1944 in All-American Comics #61, Solomon Grundy is born form the reanimated remains of a 19th century man named Cyrus Gold whose body was left in Slaughter Swamp just outside of Gotham City (home not only to Batman but also to Alan Scott, the Golden Age Green Lantern). Years later, Gold’s remains rise, now fused with plant matter from the swamp. This undead creature doesn’t look like a swamp creature but rather more like Frankenstein’s monster. The creature doesn’t remember his life as Cyrus Gold, only that he was born on a Monday and died. This leads a new acquaintance to dub him Solomon Grundy, remembering the nursery rhyme’s first line “Solomon Grundy, born on a Monday.”

In the Golden Age Green Lantern stories, Alan Scott’s magic ring has difficulty dealing with wood and plant life, so this makes Solomon Grundy a formidable foe for him. Since his debut, Grundy has fought many superheroes, killed the superhero Skyman (originally known as the Star-Spangled Kid), and featured in many Batman stories and video games. Every now and then, Grundy is seemingly killed or destroyed, but eventually rises again, sometimes with a different personality and level of intellect. House of Secrets #92 in 1971 is the first technical appearance of Swamp Thing. The story, by Len Wein and Berni Wrightson, features scientist Alex Olsen, a man living in the early 1900’s who is betrayed and then seemingly killed in a lab explosion in the swamp. The chemicals allow him to survive the experience, but mutate him into a hideous creature dubbed the Swamp Thing. Olsen takes his revenge and then, seeing that his love Linda rejects his mutated form, returns to the swamp.

This was one-shot story that proved to be popular. DC Comics made the decision that there needed to be a Swamp Thing series, with a slightly more heroic take on the character that took place in the modern day. In 1972, Swamp Thing #1 ignores the events of Alex Olsen’s story and introduces Alec Holland, a research scientist working on chemicals that will grow forests and vast crops even in a dessert. People seeking to steal his project bomb his lab. Holland is exposed to the chemicals and catches on fire as he flees the lab, finally falling into the swamp waters. Holland is mutated into the Swamp Thing and rises. Holland then goes about stopping various threats, protecting people and his swamp while often hoping to find a way to reverse his mutation.

This cult favorite character gained new popularity in the 1980s when up and coming writer Alan Moore revised the premise. In Moore’s stories, Swamp Thing discovers that Alec Holland died before falling into the swamp and that he is just a plant elemental who has absorbed Holland’s memories. Swamp Thing further discovers that he is the latest in a long line of plant elementals, including Alex Olsen, all of whom are born by similar circumstances when the world needs them. This leads Swamp Thing to abandon his quest for restored humanity, now focusing on understanding himself and the world better, and seeking out dark forces that threaten “the Green.”

Later still, DC Comics resurrected Alec Holland just as the plant elemental that mimicked him died. In a 2011 series by Scott Snyder, Holland becomes the new Swamp Thing himself.

Around the same time that Alex Olsen debuted as DC’s first Swamp Thing, Marvel had coincidentally decided to introduce a similar creature known as the Man-Thing. Stan Lee suggested the character’s name and nature to writer Roy Thomas, who considered that the character sounded similar to the Heap. After discussing several possible origins, Thomas plotted out the Man-Thing’s first story and gave it to Gerry Conway to script and Gray Morrow to draw.

Debuting in 1971 in the pages of Savage Tales #1, the creature begins life as Dr. Ted Sallis, a scientist attempting to replicate the super-soldier serum that created Captain America. When agents come to steal it, Sallis injects the only sample into himself and then flees in his car, only to then crash into a swamp. Minutes later, he rises as the Man-Thing creature.

Later on, possibly to distance him from the similar sci-fi origin of Swamp Thing, the comic Man-Thing #1 reveals that Sallis’ transformation is not due to the super-soldier serum mixing with swamp material as much as because mystical forces intervene and take advantage of the situation, creating a guardian for the “nexus of realities” that exists in the swamp. Of course, Alan Moore later gave Swamp Thing a similar origin, saying that mystic forces stepped in to create a protector, so the two characters just can’t escape being very alike. Unlike Swamp Thing though, the Man-Thing does not retain any real human identity or intelligence. It seems at times to be a creature of instinct and has empathic abilities that make it sensitive to the emotions of people around it, particularly fear. The Man-Thing doesn’t like feeling fear and when it senses the terror of its enemies it often reaches out and burns them alive with a corrosive chemical it secrets. Thus the tagline: “Whatever knows fear burns at the touch of the Man-Thing.”

That wraps it up, folks. Can you think of other muck and swamp monsters clearly inspired by “It!”