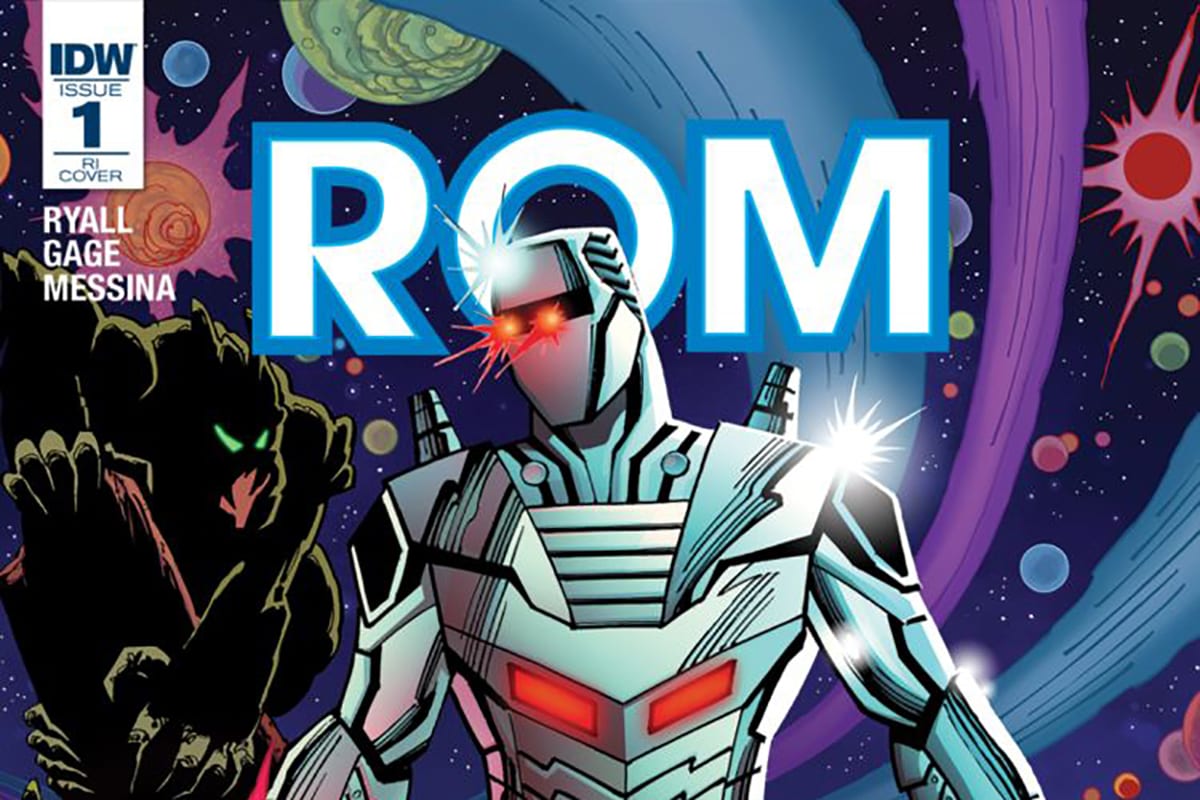 The late 1980s were full of cartoons and comic books that were, essentially, built around the need to sell toys. For instance, the Transformers and their predecessors the Diaclones were just a bunch of toy robots. It was up to the writers of cartoons and comics to build a mythology about the planet Cybertron and its civil war between living machines known as Autobots and Decepticons. Likewise, a toy from Parker Bros. wound up inspiring a comic book series that wound up outliving the original product and made the character far more popular than it ever would have been otherwise. Now, that character is owned by Hasbro and lives again in science fiction comics published by IDW. His name? Rom, Spaceknight. The origin of this character really starts in the late 1970s, when Scott Dankman, Richard C. Levy, and Bryan L. McCoy created a robot-like toy action figure with futuristic weapons, electronic sounds, and LED eyes. Deciding it needed a computer-related name, they named it Cobol, in reference to the programming language COBOL (common business-oriented language). They sold the toy to the Parker Bros. company, and it was given a different computer-related name: Rom, a reference to Read-Only Memory (ROM).

Parker Bros. had normally dealt with board games, so this was new, risky territory. To make the toy as cheaply as possible in mass quantities, just in case the whole thing fell through, Rom was given less-expensive red LED eyes instead of the originally planned green, and the figure had very few points of articulation compared to other toys (such as the aforementioned Transformers, which appeared soon afterward). This cutting of corners led to quick criticism when Rom was released in 1979. To further hedge their bets and generate more interest, Parker Bros. licensed the character to Marvel Comics. Marvel was given no origin behind this robot-like character, no clue to its identity or purpose beyond its name “Rom.” Bill Mantlo, the same writer who would later revise the Hulk’s origin to involve childhood trauma and dissociative identity disorder, was put on the comic book series along with artist Sal Buscema. Rom, Spaceknight #1, released in late 1979, starts dramatically as Rom crashes to Earth, emerging from fire not unlike James Cameron’s Terminator cyborg a few years later.

We learn that Rom is not a robot but a cyborg, though there is very little organic matter underneath the cybernetic armor and limbs. He is from the planet Galador, part of a race very much like Earth humans. To fight the threat of the Dire Wraiths, he agrees to be transferred into the body of a high-tech warrior, a spaceknight. The majority of his human body is preserved on Galador, but Rom will not allow his full humanity to be restored until he knows the war is over. Rom is the first, but his example inspires other spaceknights to join him, and together a force of 1000 fights the Dire Wraiths across the stars for centuries, which is what eventually leads him to Earth. The Dire Wraiths are shape-shifting aliens secretly living among us (and later on we learn that they also practice a form of dark magic, in contrast to Rom’s high-tech ways). Sadly, innocent bystanders can’t see through the Dire Wraith deception, so to them it looks like Rom is some killer robot randomly attacking people. This puts Rom, like so many other Marvel heroes, on the wrong side of the law despite his heroic nature. He quickly makes one friend, a woman named Brandy Clark who eventually becomes a romantic interest.

While the toy came and went from store shelves with little success, Marvel’s comic book series gained a cult fan following. Rom is a futuristic warrior yet speaks and acts like a noble knight of myth. He’s built to be a walking weapon, but lives by a code of honor that does not accept innocent life as collateral damage. At times, he is prone to righteous anger against his enemies and frustration at the obstacles in his life, especially when it later seems that he’ll be unable to ever regain his full organic humanity. But despite this, he presses on, deciding that the greater good is worth fighting for, even if it means he’ll never again feel a breeze on his skin or see the people he loves through human eyes. He’s dedicated to his war, but also desperately wants it to end, appreciating life and taking no pride in how easily he can end it. The series lasted seven years, ending in 1986 with Rom, Spaceknight #75. Including his four annuals, Rom had been the title star of 79 comics. Parker Bros. didn’t renew the license, and so Rom ends the Dire Wraith threat, has a few more adventures before regaining his humanity, and is given a happy ending where he retires from action and adventure.

With the rights now back with Parker Bros., Marvel couldn’t directly callback to the old stories or show Rom in his spaceknight armor again. Other spaceknights have occasionally shown up in Marvel stories since, such as a short-lived series that implied it starred Rom’s son. A few rare comic mentioned a spaceknight that had saved Earth. In one comic, you saw Rom again, now in human form, visiting an old friend for a wedding. But that was as far as it went. Rom had left a legacy, but couldn’t really be brought back into action, even in flashback. They couldn’t reprint the old stuff in trade either, not without first discussing shared rights and profit. But fans remembered Rom fondly. And so, after acquiring Parker Bros. and deciding to fully embrace a shared universe through IDW comics, Hasbro decided to put Rom back in action. As IDW’s Revolution crossover slammed together the Transformers, GI Joe, Action Man and M.A.S.K., all while building a shared mythology, the new Rom series launched under writers Christos Gage and Chris Ryall, along with artist David Messina and Michela Pasta. The new series has already met with success, delivering a sci-fi action thriller. Rom, now said to be from the planet Elonia but still a noble spaceknight, once again comes to Earth, this time joining forces with a member of America’s military who realizes that there is a hidden threat rising on her planet.

If you’re interested in a high-flying science fiction action series, check out the new Rom series from IDW!