Nerd 101: How Many Times Has Iron Man Modified His Body? 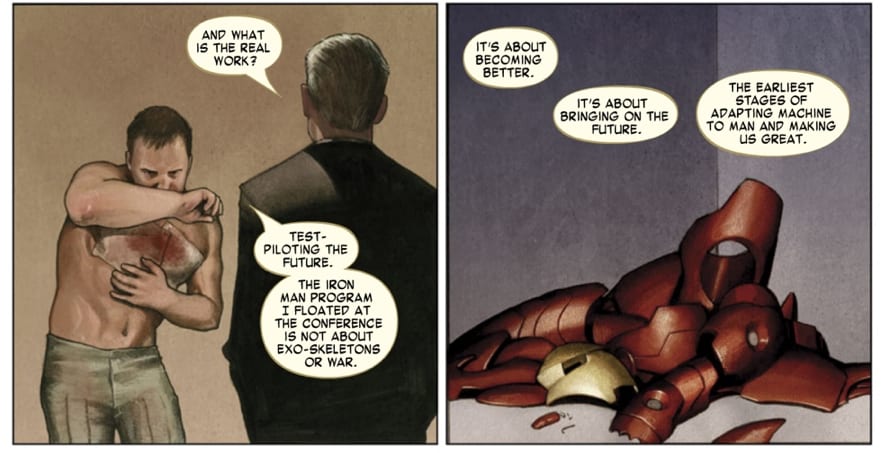 Thanks to the Iron Man films, Tony Stark has become a major superhero around the world. The star of three of his own feature films, he has also been a main character in both Avengers films, the movie Captain America: Civil War, the upcoming movie Spider-Man: Homecoming, and the upcoming Avengers: Infinity War. Known as the weapons-maker-turned-hero, Tony Stark’s career as Iron Man began when he was injured by one of his own weapons and had to build a suit of armor to free himself, a suit that also worked with an electro-magnet that kept some nasty shrapnel from shredding his heart. In Iron Man 3, Tony gets surgery and no longer needs this magnet powered by a magnetic repulsor arc unit. But in the comics, he’s had a few more body modifications than just that.

As in the movies, Tony relied on an electro-magnet to keep microscopic shards from piercing his body. But in the early days of comics, he didn’t have a small, portable unit installed into this chest that did this. Instead, he had to wear the basic Iron Man chest plate at all times and recharge it regularly.

This meant that Tony had to limit what kind of a social life he had. For further drama, readers knew that if his armor or power cells were damaged in a battle as Iron Man, the magnet could fail and then he faced possible death within moments. This state of affairs inspired a particularly memorable line from the theme song to Iron Man’s original cartoon series.

“He’s the cool exec with a heart of steel.”

After a few years, Tony’s condition worsened and one day he collapsed in public. The world learned that the injuries he suffered while a prisoner of terrorists had been far more severe than he’d ever said. Tony was rushed to a hospital and an experimental procedure gave him a new artificial heart. Tony no longer had to wear any part of his armor to keep himself alive.

The new heart, though, was not up to the strain and for a short time Tony gave the Iron Man armor to someone else so they could act in his stead. Tony eventually returned to his dual life as a superhero and businessman and simply adjusted to his new health condition.

You think YOU have annoying exes? Tony’s old girlfriend Kathleen Dare randomly showed up one day and shot him. Though he survived, Tony was now confined to a wheelchair. Refusing to let this stop him, Stark redeveloped the Iron Man armor so that he could walk while wearing it. Eventually, he went one step further and developed a special chip that worked with his nervous system and restored his full mobility.

Months after regaining the ability to walk, Tony found out that enemies had caused an infection in his nervous system. He started wearing a neural-net suit to help him stay functional, but his condition only worsened. Tony was now a prisoner in his Iron Man armor, unable to move his limbs without its power.

Realizing he needed to do something drastic, Tony faked his death and went into suspended animation as advanced technology and surgical techniques spent the next few months rebuilding his whole nervous system. No longer dying, he still had limited mobility for a while and during this time, he used a telepresence version of his armor — meaning that now “Iron Man” was a robot that Tony mentally controlled. With time and physical therapy, Tony was later mobile and healthy again.

“If I only had a heart …” During a weird story arc, Tony’s armor seemingly came to life and attacked him (it would later be revealed that the armor had been infected by the Avengers’ robotic enemy Ultron). During this fight, Tony received a serious chest-wound but then the sentient suit of armor sacrificed its life by using parts of itself to give Tony a new, robotic heart.

Similar to how his old chest-plate had worked, Tony had to constantly recharge his new heart. What’s more, it was pretty delicate and would conk out if Tony’s body took in certain substances, such as alcohol. As a recovering alcoholic, this just gave Iron Man yet more reason to stay away from the stuff.

Believing there was no other way to beat a new, technologically-enhanced terrorist, Tony decided to upgrade himself from human to cyborg and injected his body with a nanite virus called “Extremis.”

With Extremis, Tony Stark could now mentally tap into technology, giving him greater control of his armor and allowing him to do things such as “see” through the eyes of satellites and transmit data or cellphone message with his brain. Nanites in his bone marrow would create his under-armor around him at will. His body was fully under his control, allowing him to improve on his organs (enhancing brain power and doing away with his faulty, robotic heart) and giving him great healing abilities.

A couple of years later, the alien Skrull race infected all Stark technology with a virus, including Extremis. This robbed Tony of his new abilities, though the changes he had done to his body could not be undone now, so he was still not technically a normal human being.

Later on, Norman Osborn wanted to know all of Tony Stark’s secrets and all the information he’d learned about other superheroes, Iron Man responded by deleting his own brain. But Tony’s not suicidal, so he came up with a back-up plan to reboot himself.

The secret behind the Iron Man armors has always been Tony’s special Repulsor Generator Technology (known as “Arc Technology” in the film). Following instructions he’d left behind, Thor, Dr. Strange and Captain America were able to revive Tony’s body and mind to full health by using some mystical arts, psychology, radical medical procedures, and implanting a repulsor power disc into his chest. As a result, just like in the first two Iron Man movies, Tony’s body functions were now powered by a glowing disc in his chest.