NERD 101: The Many Origins of Iron Man 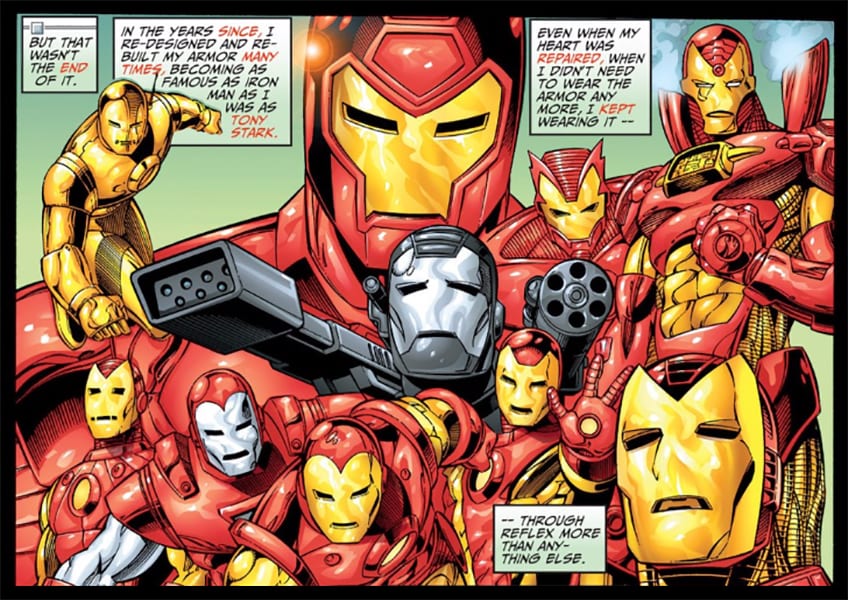 (NOTE: Obviously there are different origins in the cartoon and film adaptations, so just to keep things short, this article is focused on the comic book versions of how Tony Stark’s original armor was created.)

The 1960s was a time of counter culture rebellion in the U.S. Marvel Comics tapped into this by making several new characters who were teenage outcasts or regarded as monsters by older authority figures. One character stood out among them. One hero was Tony Stark, a wealthy inventor and industrialist who arguably represented the same authority, class and privilege that many teenage readers felt they stood against. According to Stan Lee, he conceived of Tony Stark to prove that he could make even this type of character, who was partially inspired by Howard Hughes, into someone with whom teen readers could identify. The gambit worked. Though his popularity has had ups and downs, Tony Stark remains a major foundation of the Marvel Universe as the armored founding member of the Avengers known as Iron Man. But how did that armor get created?

Tony Stark debuted in Tales of Suspense #39 (1963), written by Stan Lee and his brother Larry Leiber, and illustrated by Don Heck. The Iron Man suit was designed by Jack Kirby and Don Heck.

The story shows Stark visiting Vietnam to see how some of his new technology is working out for American military forces. During the visit, he trips over a land mine though and is captured by the forces of a local warlord named Wong Chu. Tony is injured by the land mine shrapnel and is told he’ll only get life-saving surgery if he agrees to make Wong Chu a great weapon. Tony is provided a small lab with equipment and also an assistant, renowned physicist Professor Yinsen, another prisoner.

Tony quickly decides to build a weapon that will help him escape, an “iron man” suit of armor that will not only give him protection, strength and weapons, but also keep the shrapnel from reaching his heart. It’s clear that the Iron Man suit is something Tony thought of as soon as Wong Chu demanded a weapon from him. With Yinsen’s help, the suit becomes a reality and Iron Man is born. Tony then goes back home and uses the more advanced technology in his own lab to update the suit and then paints it gold so he own’t seem quite as threatening. Later, he creates the first of many better, more advanced suits of armor that are more form fitting and usually colored red and gold. This was the same basic origin for many years, though some stories say that Tony’s origin story begins with a visit to “Southeast Asia” rather than Vietnam specifically. In 1991, Iron Man #267 presented an expanded version of Iron Man’s origin by writer John Byrne (known for retconning more than a few superhero origins) and artist Paul Ryan. According to this account, Wong Chu actually works for the Mandarin, fated to become one of Iron Man’s greatest enemies. The Mandarin seeks to better understand the alien technology of his rings of power, and has used Wong Chu and his forces to stage attacks on Stark’s munitions factory in Southeast Asia in order to lure the inventor/industrialist. Wong Chu then kidnaps Stark, who activates a landmine during the confusion.

When Tony wakes up in this version of the story, Professor Yinsen is already present in Wong Chu’s camp. He explains that he has been a prisoner for some time, repeatedly refusing to build weapons for Wong Chu. Yinsen suspects that the warlord works for a greater and unseen villain, someone with the resources to provide a state of the art lab for himself and Stark. Fearing that Stark will die without Wong Chu summoning a surgeon, Yinsen agrees at last to build a weapon. Stark seems to agree as well, but then tells Wong Chu about an idea he’s just had: the Iron Man armor. The rest of the origin story then plays out the same way. In 1996, Marvel attempted to reboot some of its characters under the title “Heroes Reborn.” This included a new Iron Man origin written by Jim Lee and Scott Lobdell, with art by Whilce Portacio. In this altered version of reality, Tony Stark builds a version of the Iron Man armor years before he ever needs to use it himself. The project is called “Prometheus Rising” and is intended to provide the suit for the military. Tony’s best friend from college Conner “Rebel” O’Reilly becomes the pilot of the prototype suit, and demonstrates its combat and flight capabilities. But then a malfunction happens and he dies during the test. The project is scrapped but Tony keeps one of the Prometheus armor prototypes hidden away in his private office. Guilt over Rebel’s death causes him to become callous and withdrawn.

Years after Rebel’s death, the terrorist organization Hydra attacks one of Tony’s facilities, aided by Tony’s friend and colleague Dr. Bruce Banner. These events wind up mutating Banner into the Hulk and he attacks Stark. Tony winds up with shrapnel in his chest and decides the Prometheus armor’s life support systems should be enough to save his life. He dons the armor and winds up a hero, labeled “Iron Man.”

None of the changes of “Heroes Reborn” stuck with the mainstream Marvel Comics, but a sliver of this story did inspire later retellings of Iron Man’s origin. In 2002, Iron Man vol. 3 #50 gives a new backstory to the armor, as told in the story “Tin Man” by writer Mike Grell, and artists Michael Ryan and Sean Parsons. In this version of events, the origin of visiting a Southeast Asia plant and getting shrapnel from a landmine remains the same. What changes is that Tony does not first imagine the Iron Man suit when Wong Chu demands a weapon from him. Instead, Tony develops the “Iron Man” project years earlier as an exo-skeleton to help soldiers in combat, increasing strength and reflexes. A design flaw leads to the decision that soldiers need drug stimulants to be able to operate the exo-suits properly. This, however, leads to other problems. Tony visits Southeast Asia to consider how to improve his weapons tech and is confronted with the fact that he keeps looking at the technology but not the soldier who uses it, and so he is doomed to failure.

When events then lead to his capture by Wong Chu, Tony realizes an improved version of his previous “Iron Man” project will ensure his escape, and he’s able to make this a reality thanks to Yinsen’s help. I personally prefer this idea, as it’s just a tad more realistic to me that Tony would be able to make such a suit on at least a second try rather than building it from scratch in a limited facility, even with help from a brilliant physicist. In 2005, Warren Ellis and artist Adi Granov relaunched the Iron Man comic book series with a story called “Extremis,” which upgraded Tony’s technology and connection to his suit, as well as revised parts of his origin. Southeast Asia is replaced with Afghanistan. Tony, at age 19, visits the area to check on how his tech is working for soldiers. Enemies attack and one of Tony’s own land mine explodes, delivering shrapnel into his chest. So now, it’s Tony’s own weapons that cause his life-threatening injury.

When Tony wakes up, he sees Professor Yinsen, just like most of the origins before. But this time, the story tells us this is not the first time they’ve met. The two recall a technology conference years before. Yinsen is no longer described as a physicist but as an engineer who is also a leading innovator in medical technologies. Tony recalls Yinsen created a process for “magnetic wound excision.” Tony then reminds Yinsen of a project he imagined years ago, an exo-skeleton for soldiers called “Iron Man.” He proposes the two of them combine their abilities to create a new version of the Iron Man armor, one that will use magnetic repulsor technology to keep Tony alive while he frees them from their captors.

This last version was borrowed from heavily in the Iron Man film adaptation, although they went back to the idea that Tony had never considered making a suit of armor before waking up as a prisoner alongside Yinsen.

And that brings us up to date! Time will tell what other new revisions to Iron Man’s armor origin will come later on. This is Nerd 101, signing off!