Nerd 101: What is the Deal with Captain America’s Shield? 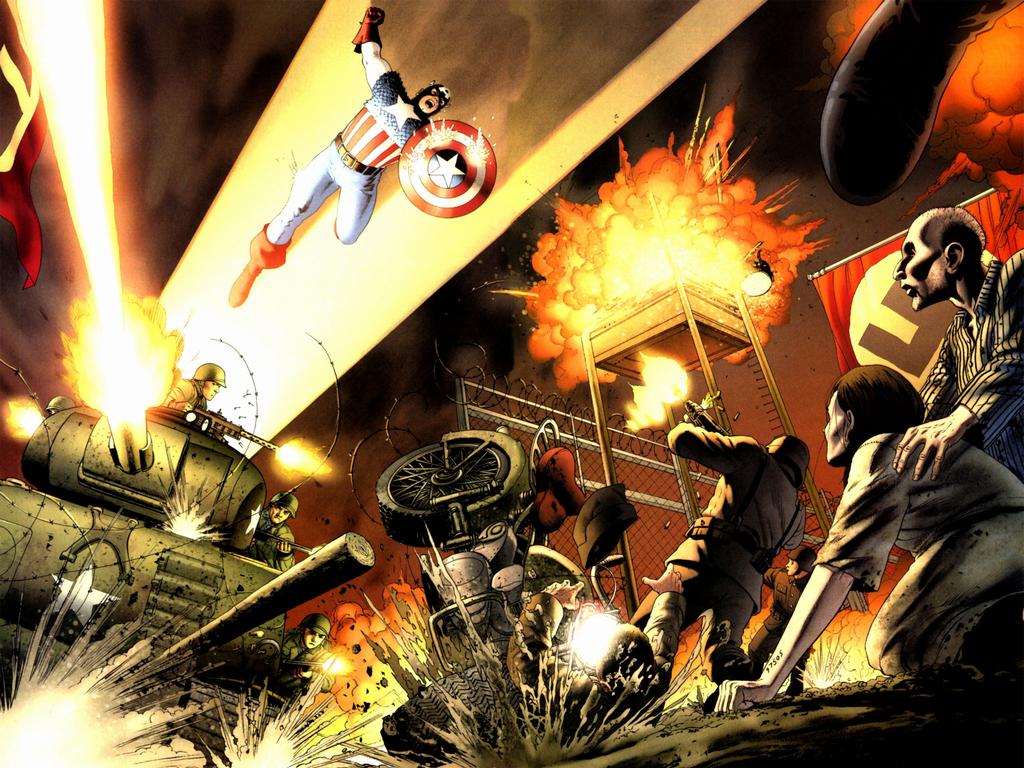 We tend to marry heroes to a special weapon, vehicle, super-power or fighting technique that they use. Superman flies. Spidey has web-shooters. Batman has his cool car and his batarangs. Wonder Woman has her lasso. Captain America has his mighty, ricocheting shield. But for Cap, that wasn’t always the case. For years, the shield was not used as a discus weapon. And for the first few stories, it wasn’t even round. In Captain America Comics #1 in 1941, Steve Rogers uses a star spangled heater shield in his battles. Historically, heater shield design developed from the kite shield used in battle in Europe. Later models were flattened on top, becoming known as heater shields due to their resemblance to the shape of a clothes iron. This was more maneuverable than the kite shield and could be used either on foot or while mounted on horse.

Captain America was introduced as a person whose body was enhanced, but who had no super-powers. He is later described as being pushed to the peak of human ability. So he can run faster than a horse, jump over ten feet straight into the air, and is several times stronger than a person his size and weight should be. But he’s not bulletproof. His body armor includes chainmail draped over it, and on top of that he was given the simple heater shield. It had no special qualities, was made of nothing mythical or science fiction in nature. It’s just a shield to protect against gunfire.

But right after Cap’s comic book debut, John Goldwater, head of MLJ publishing, complained that the hero’s heater shield looked too similar to the costume worn by their superhero Dr. Joe Higgins AKA the Shield. No lawsuit went into action. Captain America creators Joe Simon and Jack Kirby altered the shield starting in Captain America Comics #2, giving it a disc shape, and the matter was settled. This new shape didn’t change the function. The shield was just that, an item that protected Cap from attack.

There was a notable exception to this, however. Captain America Comics #3 included a 2-page prose story written by Stan Lee. This story was, in fact, his debut as a writer for Timely Comics (which would later be renamed Marvel Comics at his suggestion). The story “The Traitor’s Revenge” features Captain America throwing his shield like a discus in order to disable an enemy. It’s a great idea, but it didn’t carry over into the main comic book adventures as a new offensive technique. Throughout the Golden Age of comics, Cap only threw his shield again a few times before his series was cancelled.

In the 19602, Stan Lee, Jack Kirby, Steve Ditko and others truly created what we now know as the Marvel Universe. After introducing several years, as well as teams such as the Fantastic Four and the Avengers, Lee and Kirby brought back Captain America, saying he had been frozen alive for years and was now awake, still young, and ready to fight. Joining the Avengers, Cap now not only threw his shied as a weapon on a regular basis, he even ricocheted it off surfaces and enemies with incredible accuracy, sometimes taking down multiple enemies before the path of the shield returned it to his waiting hand. It was visually exciting and different from other heroes, enhancing Cap’s image of being a super-soldier, and making what was before just a colorful shield now an almost magical tool. It also became a symbol of how the super-soldier program had transformed Cap’s mind as well as his body. It was thanks to his enhanced reflexes an brain power that he was able to instantly calculate the trajectory and strength he needed for his shield to hit his opponents at just the right angles. Not just anyone could pick it up and consider themselves Captain America.

Eventually, questions came up: Just how did the shield have such a great ricochet ability? What was it made out of that allowed it to block all the superhuman powers and strange weaponry that Cap came across? A simple solution was found in the fictional metal called vibranium.

In 1966, vibranium was introduced as a unique metal in the pages of Daredevil #13, with art by Wally Wood and story by Stan Lee. Months later, Marvel readers learn the source of vibranium in the pages of Fantastic Four #52. This comic introduced T’Challa AKA the Black Panther, the first black superhero of Marvel Comics. T’Challa is king of Wakanda, a fictional African nation said to have never been conquered by outsiders. Vibranium is an ore exclusively mined in Wakanda, said to have been deposited on Earth by a meteorite strike roughly 10,000 years ago. The sample seen in the pages of Daredevil was revealed to be a different form of vibranium that can be found in Antarctica, an ore that actually melts all other metals, earning it the nickname “anti-metal.” Pure vibranium mined in Wakanda has a different unusual property. It largely absorbs kinetic energy and sound.

A connection to Steve Rogers wasn’t immediately made. But in 1981, writer Roger Stern and artist John Byrne retold the origin of Captain America and added new details to his story. In their revised tale, Steve uses a simple steel heater shield originally, but is later presented with the circular shield as a gift from President Roosevelt himself. FDR explains that it’s made of an iron-vibranium alloy created quite by accident, and all attempts to recreate end in failure. The scientist who had accidentally created the alloy, Dr. Myron MacLain, later winds up creating a new unbreakable artificial metal he names “adamantium” (which had first debuted in Avengers #66 in 1969).

This meant that Cap’s shield symbolically echoed him. Like Steve Rogers, it was one of a kind. Like Steve Rogers, it was dedicated to defense as well as attack rather than only one or the other. The vibranium properties were what allowed it to ricochet so often without losing most of its momentum. It also explained how Cap could use the shield to block punches from the Hulk and other attacks without breaking his arm in the process. The shield absorbed most of the impact directed against it.

Of course, any scientist will tell you that such an absorption quality would have a limit and that energy collected must also be released. The movies have addressed this. In the movie Avengers, Thor slams his incredible hammer against Captain America’s shield. While Steve is kept safe, the shield converts the kinetic energy of the attack into a shockwave that rocks Thor backwards. In the movie Avengers: Age of Ultron, Thor deliberately strikes his hammer against Cap’s shield to create a focused shockwave that takes down multiple enemies.

Interestingly, in the Marvel Cinematic Universe (the fictional reality shared by the Marvel Studios movies), Cap’s shield is pure vibranium rather than a vibranium-iron alloy.

In the series Black Panther, it was revealed that Captain America had gotten the vibranium that was later used to create his shield as a gift from T’Challa’s grandfather. In the mini-series Black Panther/Captain America: Flags of our Fathers, we saw this interaction in full detail. After Steve and others help the WWII era Black Panther fight off Nazi invaders, the then king of Wakanda decided that vibranium is a fitting gift. But he gives the sample on the condition that whatever weapon it is used to make, only Steve will be allowed to wield it.

So Captain America owes his greatest weapon to the generosity of an African hero.