MOTHER! Is An Intense Thriller That Spirals Out Of Control 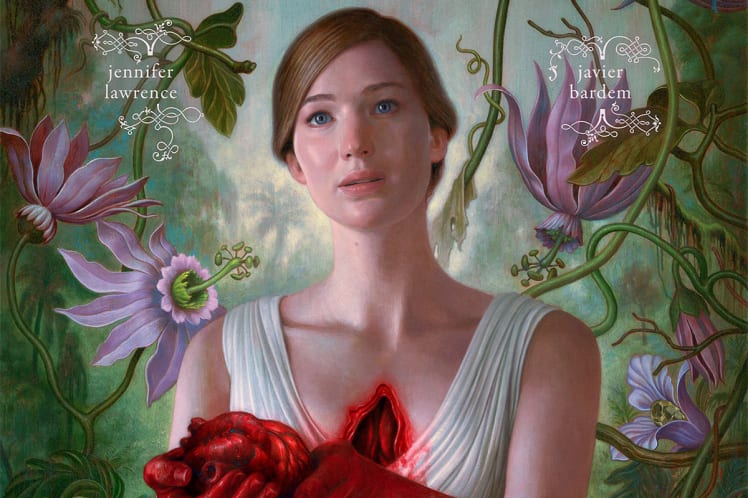 Mother! is like Curb Your Enthusiasm meets an intense Hitchcockian thriller, which is a sentence I never thought I would write in a movie review. Directed by Darren Aronofsky (Black Swan, Requiem for a Dream) Mother! is this year’s Birdman; a surrealist take on fame and celebrity where the viewer will start to question what is “real,” imagined or just plain metaphorical on the part of the filmmaker. That look when your hubby invites some rando couple to live with you.

Before we are treated to a bizarre descent into madness, we meet a married couple with a twenty-year age difference living in a large, remote country home. The wife (played by Jennifer Lawrence) is devoted to her poet husband (Javier Bardem) who is suffering from a case of writer’s block. Putting the “artsy” in “artsy-fartsy.”

They seem happy enough as the wife attempts to redecorate and remodel the poet’s home that had been previously burned in a fire, while he tries to once again get the flames of creativity burning. However, this docile existence is ripped away when one night a stranger arrives (Ed Harris), and he and his rude wife (Michelle Pfeiffer) are invited by the poet to move into the house indefinitely. This leads to some of the more, dare I say, “comical” moments that are played for horror instead of laughs. The same awkward social situations and breaking of taboos that Larry David may find himself in are made gut-wrenching in the hands of Aronofsky. The poet invites a total stranger to stay in their home without even asking his wife. The look that Jennifer Lawrence gives him says it all. The same look that any of us would give our spouse in the same situation, but in this film, the look is almost of panic. These moments build as the stranger’s wife moves in and grills Lawrence’s character on her intention to have or not have children with the poet. This off-putting awkwardness culminates with the sudden arrival of the stranger-couple’s two sons and the invasion of privacy takes off into the realm of true nightmares.

The first clue that everything is not what it seems early on is that the characters never give or say each other’s names. This creates some odd scenes where introductions to strangers are not made and points at which one would call out someone’s name go by with no name called. It’s like all the characters were Norm’s wife on Cheers (that reference is a deep cut, go ask your Dad.) You wouldn’t believe what he has to go through for some inspiration!

A great man once said:  “Not about to see your light. And if you wanna find hell with me. I can show you what it’s like. Till you’re bleeding – OH MOOOOTHER!”

That is about as a good a synopsis for the film Mother with an exclamation point as anyone could give.  Open for everyone’s own interpretation or misinterpretation, possibly upsetting to parents and something that is going to get stuck in your head for a while after you experience it.

He has upgraded from tossing a coin.

An artistic film like Mother! promoted to a wide audience, featuring huge stars is sure to stir up controversy. It may rub some viewers the wrong way, not for what is actually said or done on screen (although that will also serve to shock some) but rather what is left open for interpretation. (SPOILERS, if you want to go into the film completely clean, please abandon us here!) Toward the end, what is an intense, spiraling out of control thriller that will have you holding on to your seat screaming “WOW, WHERE IS THIS GOING?!” suddenly takes a left turn into an absurdist, allegory for what at first could be interpreted as the drawbacks and nightmare of fame. Yet biblical metaphors abound and those with a strong knowledge of the Good Book and the tenants of Christianity will come away with something completely different; a clear bible story as retold through and imaginative, if horrific story.  (As I said a lot of room for interpretation, and also being offended.)

Last week I told you that Stephen King’s IT had one of the most demented sequences in a major Hollywood film. That was until I saw Mother! Although I should give some warning: true gore hounds and horror genre fanatics may be disappointed if they were expecting horror and not thriller. The trailer and marketing of Mother! may have done a disservice for promising too much in the wrong direction. Going in, I was expecting a modern take alluding to Rosemary’s Baby. Perhaps so close to Halloween, with other horror movies either in theaters or about to be released, I assumed Jenifer Lawrence would be covered with buckets of blood. Well, there are buckets and there is blood, however for those of us like me, going in expecting buckets of blood followed by a smash cut to the end credits and a blasting rendition of Danzig’s “Mother”- it is best to clear your mind of all of that and go into Mother! fresh. Fans of Aronofsky’s previous mind-bending work will not be disappointed by this new entry.

Have you seen Mother!? What was your interpretation of that insane ending?