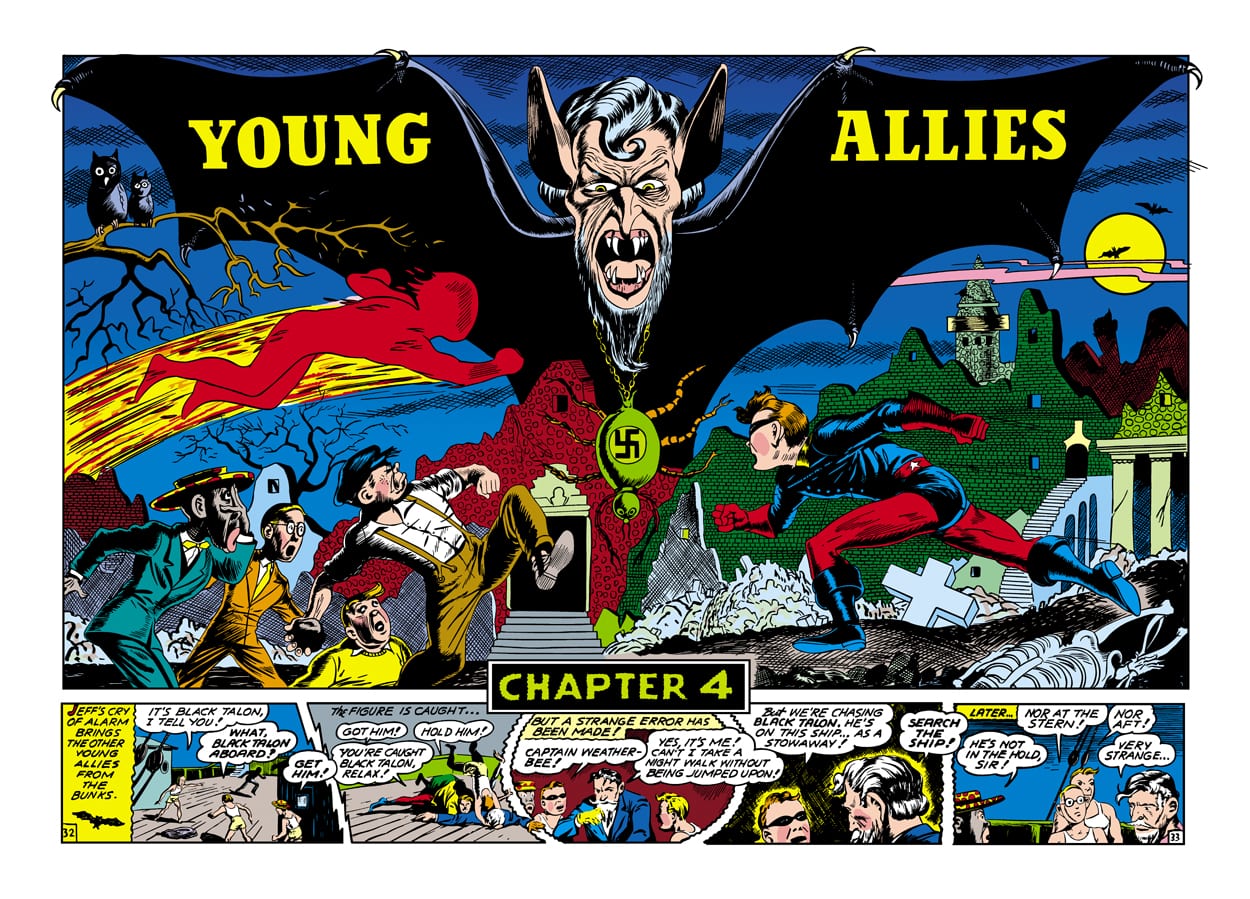 Staring with Captain America Comics #1, the comic book suggested that readers join the Sentinels of Liberty fan club. All they had to do was send in some money for a tin badge. Starting in Captain America Comics #4, the Sentinels of Liberty were referenced within the stories when we saw Bucky Barnes rally together a large group of Captain America supporters to help him out. After we saw this happen a few times, it was decided that Bucky should start teaming up with a regular group of patriotic adolescents, a response to the Hitler Youth. But sadly, this team also accepted body shaming and racial stereotypes.

In the summer of 1941, Young Allies Comics introduced this team that Bucky had gathered: Irish street kid Percival Aloysius O’Toole (known to friends as “Knuckles”), boy genius Jefferson Worthing Sandervilt, overweight circus boy Henry “Tubby” Tinkle, and an African-American child with the absurd name of Whitewash Jones. Completing the team was the Human Torch’s sidekick Toro Raymond and this made the comic historically significant. During the Golden Age of Comics, cross-continuity was not the general rule of comics released by the same publisher. You didn’t automatically assume that different Timely Comics heroes inhabited the same version of Earth. It wasn’t even necessarily true (or in some cases likely) that characters starring in the same book existed in the same universe. The first crossover of Timely Comics was a three-part tale during the summer of 1940 that was published in Marvel Mystery Comics #8-10. This story had the android Human Torch and Namor the Sub-Mariner engage in a full on battle, which finally ended with a stalemate, followed by the characters agreeing to peacefully part ways. It could be argued that this first crossover set the stage for so many Marvel Comics stories wherein heroes wound up fighting each other due to misunderstandings or a disagreement on morality. After this crossover, the two heroes went back to starring in separate stories featured in the same comic. Young Allies Comics became the first series published by Timely that regularly crossed over characters who primarily starred in other books.

Captain America and Bucky creators Joe Simon and Jack Kirby only worked together on the first issue of the series, as their relationship with Timely was straining and they were heading over to National Comics (which would be renamed DC Comics in later years). Young writer Stan Lee took over writing with Young Allies Comics #2 and artists Al Gabriele and Syd Shores took over for Jack Kirby starting with issue #3. The title had many other artists and writers before its cancellation in 1946.

Like the teenagers who were serving overseas, they were ready and willing to fight real battles. The first adventure of the Young Allies involved the Red Skull, Captain America’s arch-enemy. Cap never got to punch Hitler except on a cover, but over the next five years Bucky’s team of adolescent patriots who never seemed to age got to actually beat up each of the three Axis Powers leaders: Benito Mussolini, Hideki Tojo and Adolf Hitler himself.

The Young Allies also served as a symbolic counterpoint to Hitler Youth. The Hitler Youth was officially active from 1930-1945, although it grew out of previously existing organizations. The main paramilitary group recruited males ages 14 to 18. A separate wing that recruited females ages 10 to 18 was known as the German League for Girls, while the German Youth wing dealt with boys ages 10 to 13. The children recruited were indoctrinated into the Nazi doctrine, taught to serve the Third Reich faithfully and without resistance. Military training was emphasized over academic education. As Germany took control of more countries, local boy scout organizations were banned and their activities were absorbed by the Hitler Youth. Rather than engendering community spirit, cruelty was tolerated and rewarded even within the organization’s own ranks as a means of separating the “strong” from the “weak.”

Bucky Barnes and the Young Allies operate in direct opposition to the principles of the Hitler Youth. Rather than obeying all orders without question, Bucky loves democracy and exercises his freedom of speech by constantly spouting off smart remarks, not only towards his enemies but toward Cap himself. Likewise, the Young Allies would debate and argue various points before compromising on solutions. Rather than adopting the belief that they were born superior to others, here are kids of different backgrounds who recognize that their collective differences make them a stronger whole. They were daredevils and rebels who didn’t always wanted to do the right thing, even if they weren’t sure how they could accomplish it. But despite all this positivity, we have to acknowledge the weaknesses of the group. The Young Allies were very much 2-dimensional characters who often got captured and had to be rescued by Bucky and Toro, the two official superhero types. Tubby was simply a caricature of an overweight child and Knuckles didn’t have a personality beyond being a rebellious Irish kid who enjoyed fighting. Though the group was hailed as multi-racial group for including an African-American kid during a time when segregation was still strong in the U.S., the character in question was a sad stereotype. Whitewash Jones was portrayed as the bumbling fool of the group, his dialogue full of grammatical errors and reminders that he wasn’t even as educated as the circus boy and street kid of the team. When the Young Allies could hear Jeff nearby but couldn’t see him, Whitewash wondered aloud, “Am he invisibilous, maybe?”

The interior artwork portrayal of Whitewash gave him stereotypical clothing, often times with exaggerated facial features. He was a sad satire of a black teen in America. In Young Allies Comics #1, a character remarked that Whitewash was an excellent harmonica player and he enthusiastically said, “Yeah, man! I is also good on de watermelon!”

In the 1960s, Stan Lee and Jack Kirby decided to revise large aspects of the history of Captain America and Bucky up to that point rather than be bound by stories written under different standards in another time, including stories they’d worked on themselves. In the 1970s, Marvel writer Roy Thomas wrote new stories featuring the Golden Age heroes and revealed that the comics published at that time had been fictionalized accounts of the “real” stories. This meant that in-universe, Bucky Barnes and Steve Rogers were able to pick up the same copies of Captain America Comics that had been on the stands in our world during WWII, some of which they considered to be a far cry from the truth. This idea was repeated and expanded on in 2009 with the publication of Young Allies Comics 70th Anniversary Special. In this comic, written by Roger Stern and with art by Paolo Rivera, readers were told the “truth” about the Young Allies of the Marvel Comics Universe. Bucky recounts to the readers how he had been asked by the government to speak to a patriotic youth group called the Sentinels of Liberty. Afterward, its leaders, nearly all of whom were older than him, approached Bucky. Jeff and Knuckles were similar to their 1940s counterparts, though a few years older and now given the full names of Geoffrey Worthington Vandergill and Pat O’Toole. Tubby was simply introduced as Henry “Hank” Tinklebaum. The final member of the group was a polite black teen dressed in a simple, professional-looking suit who said, “I’m Washington Carver Jones. My friends call me ‘Wash,’ as I hope you will.”

Bucky then revealed to the reader that these four young men had wound up helping him in a battle against the Red Skull’s forces. In the final minutes of the skirmish, Toro Raymond had appeared and this was the first time he and Bucky had actually met. As Bucky tells the reader, this adventure meant a lot to him. He’d not had any friends his own age, now he had five. He then reveals that the Young Allies Comics series was created in-universe by the propaganda office as soon as news spread about this adventure he and the other teens had shared. Bucky remarks to the readers that he didn’t care for this propaganda comic as it portrayed his friends as 12-year-old caricatures of themselves. While the comic was being published, the real Knuckles enlisted in the Army, Wash Jones became a Lieutenant in the US Air Force, Hank joined the Marines, and then he and Geoff both worked for the O.S.S. When the group reunited in 1944 along with Toro and Bucky, they laughed about how they were portrayed in Young Allies Comics.

HANK: “. . . I was never as fat as they draw ‘Tubby Tinkle.’”
WASH: “You got off lucky, Hank. They make me look like something out of a minstrel show! I mean, I was treated a lot worse when I went off-base in Tuskegee, but . . . ‘Whitewash Jones’? You can tell those writers have never been uptown.”

So it took 70 years, but one of Marvel’s first black characters was finally given some respect and identity. It’s never too late to fix mistakes and damage done in old stories.