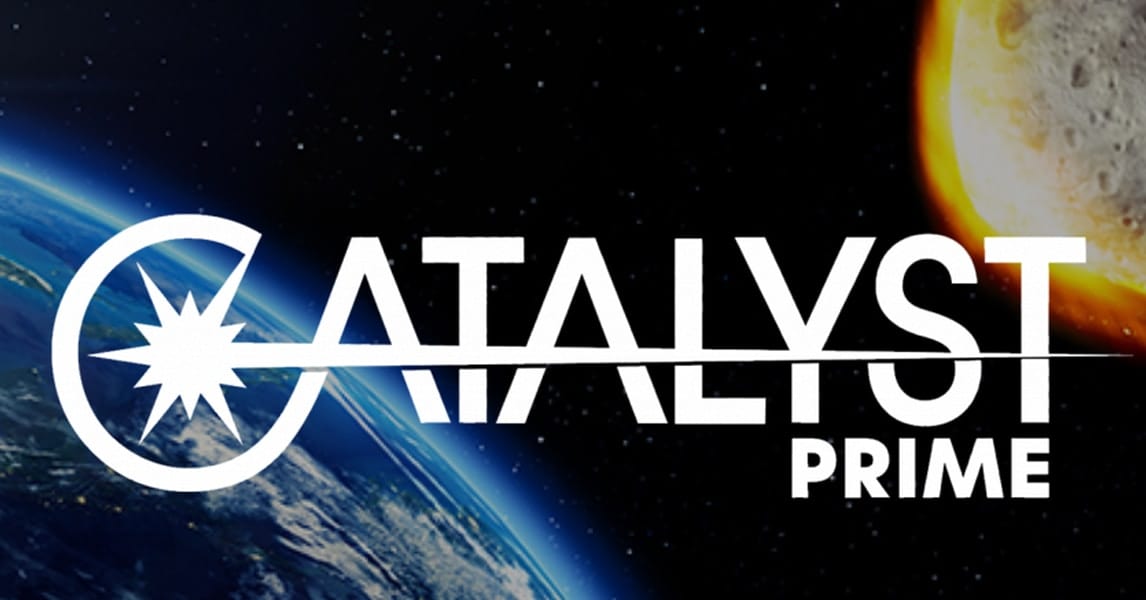 Joseph P. Illidge (@JosephPIllidge) is a man of many hats. He is the Senior Editor for Lion Forge Comics, a writer of Solarman, a columnist at CBR, a former editor for DC Comics, and a former editor of Milestone Comics. At Lion Forge, he’s spearheading a new superhero universe called Catalyst Prime. Readers will enter this new world with a Free Comic Book Day one-shot in May, written by Illidge and Christopher Priest, and with art by Marco Turini. Catalyst Prime #1 will depict the events that change the Catalyst Prime world from one similar to ours into one inhabited by living superheroes. Following that, we’ll get several new series under these creative teams (one of which includes Oodon’s own Ramón Govea):

May 2017 – Catalyst Prime One shot by Joe Illidge, Christopher Priest and Marco Turini.

So what is Catalyst Prime? Well, when Earth detects an incoming asteroid collision, the privately-owned Foresight Corporation sends four astronauts on a seeming suicide mission to stop it. But things don’t work out as expected and superhumans are the result. After the one-shot on Free Comic Book Day, many of the Catalyst Prime books begin their stories one year after the event.

I chatted with Joseph Illidge about how he and Lion Forge are shaping the Catalyst Prime universe and making sure it stands out from the many superhero titles already being published.

ALAN KISTLER: “Milestone had a ‘Big Bang Event’ that was its starting point. It was an event that caused a sudden surge of superhumans and set the universe in motion basically. A lot of modern takes on superheroes now do that, whether it’s that Captain America started a biological arms race and so many superhumans who emerge later get their powers because people keep trying to recreate or top Captain America, or if you say that the TV version of Flash got powers due to an event that created dozens or hundreds or superhumans all at once, so suddenly these folks are everywhere and the world has to deal with it. Catalyst Prime obviously has the same idea, that’s declared just in the title.”

JOSEPH P. ILLIDGE: “The idea of the singular thing that is, as you pointed out, the catalyst or the impetus in some cases for wide sweeping change is a really sexy idea in fiction. It’s hard to find one thing that shapes a person. Usually it’s multiple things. If you look at a person like Malcolm X, his life went through so many stages of transformation because there is no one main thing that made him the man that he became. It was a series of events.

“It gives us a clear starting point and as a world that is constantly being updated. So it’s this living intellectual property that is constantly in movement, and that’s pretty exciting. For me it’s really exciting to start people on something new. And you can move forward in this world as the characters are as well. And your journey of exploration parallels their journey of exploration. That’s exciting to me. So I really dig that.”

KISTLER: “I think it also works because it gives us a familiar grounding point with the characters. We don’t have to wonder what their world history was, what music people listened to, what political parties exist, because it’s the same history as our world up until this new event that brings about superheroes or at least brings superheroes and villains into the public light for the first time. Whereas if you have a modern day superhero universe and also say that it had costumed superheroes in the 1930s and 40s who were seen by the public on a regular basis for years, I’m immediately thinking that at the very least this world’s pop culture history must be so different to ours. What music and art was inspired when some of the most powerful people in the world ran around 1940s New York in bright primary colors and capes and finned helmets? If Starman is a public hero in the 1940s, he must have inspired some kind of fashion line. The modern DC Universe would look and feel a little different even before modern superheroes show up. At the same time, when people are looking at the Catalyst Prime universe ten years from now, some similar issues can come up. Reader still wonder how a world can have Tony Stark and Reed Richards and Hank Pym all co-exist and not look more like Back to the Future II after ten years instead of our own world.

ILLIDGE: “Right. That’s funny. That’s a tricky balance to maintain and we don’t have to worry about that so much… It’s a real cakewalk and I don’t envy anyone having to do that cakewalk. I think sometimes you can err on the side of reality though and still have an intellectual property with some potency. People who know me know that I was the editor of Birds of Prey for a while and that one of the characters I love is Oracle. And I’m one of those people who will always feel that Barbara Gordon as Oracle is more important than Barbara Gordon as Batgirl ever was or will ever be. That character as a wheelchair user had so much symbolism and so much capability for symbolism. Even though in that world of the Justice League, S.T.A.R. Labs and mystics like John Constantine and Madame Xanadu, I feel like they could have left her a wheelchair user for the greater symbolic impact and for a more profound intellectual property.”

“When I assembled the [Catalyst Prime] team of writers, the first thing that I arranged was to go on a creative retreat where we all sat in a room and we fleshed out the universe… The skeleton of it was created by the owner of Lion Forge David Steward II and various partners of his… We were able to create kind of like a uni-mind and bounce ideas off each other, all come in sync with what this universe is and who these characters are, and at the core of all the stories is a character… There will be some kind of connection… Then after character comes some kind of world truth. Then you get into every book having its own identity.

“And then working on Batman, I learned about brand management, which is really important. We have the Catalyst Prime universe bible. And that was something that I learned working at Milestone and working at Batman is that you had to have a bible which explains the characters, their world and the rules of that world. So that when any new people come on board, you give them that and you say, this is what it is. Ingest it, digest it, and then go forth.”

KISTLER: “A new superhero universe is also exciting for me because it’s not locked into the same business concerns as superheroes who have been around for decades and are part of a big corporation. I dig that when I pick up issues of Catalyst Prime comics, I won’t know if these characters will survive. I won’t know if one of them suddenly turns around and is evil that this will be undone and revealed as mind control or something. This isn’t Superman where I know the corporation behind him needs him to still be someone they can put on kids’ T-shirts six years from now. I don’t know what’s going to happen.”

ILLIDGE: “That’s right. And one of the things that Dave Steward II, the owner of the company, told me is that he wants the Catalyst Prime universe to be a universe of consequences. So you really don’t know that the character you love is going to be around in six years. It’s almost like what the comic book industry was before Previews, before the internet. You had no idea in advance what character was going to die. You got knocked off your legs. It would be nice to get knocked off your legs again.

“I think people are going to find it interesting… When you’re dealing with superheroes, there are archetypal ideas that people have become familiar with and that they embrace wholeheartedly. So the interesting thing is finding a way to embrace those archetypes but subverting your expectations so that there’s something different about those characters. The same way that Superman and Shazam are basically the same model, but those are two fundamentally different characters on profound levels…

“Across [Lion Forge]… from all the imprints to our staff, we are committed to the idea of comics for everyone. And what that means is an inclusive mentality. And it’s going to take a while to – I think – get characters that cover the spectrum. But you can see that coming out of the gate, we are making a good effort to do that. And this is at the genesis of things so that means that as they evolve it’s only going to expand more in terms of representation.” KISTLER: “I definitely appreciate taking different perspectives and identities on books in the same universe. Sometimes, I think a company can forget that and then you have three Avenger teams alongside three X-Men teams, or two Justice Leagues and the Justice Society, and there isn’t a difference in focus or themes between the groups, just their rosters. I appreciated back in Milestone that they clearly all belonged to the same world but Hardware was dealing with a class issue and a hero who just wanted to own his work, and his mission was different than Static in high school, and Rocket and Icon talking about providing an example to society. It sounds like Catalyst Prime will be similar in that it’s not just deconstructing superheroes but rather approaching superheroes and similar ideas from another perspective.”

ILLIDGE: “Hardware was very meta. The themes of Hardware are not only for people of color but for creators. You get paid to do something that you love, you feel like you should get more of the profit, and you’re told no. The story of Hardware is the origin of Image Comics. And Icon was brilliant. Icon was not just about the war of ideologies between W.E.B. Dubois and Booker T. Washington, Icon was about realization of ideas because Icon [the character] was actually created by Rocket. She was the writer who convinced this alien to become a superhero and she made herself his partner so that she could keep him focused. So both of them had themes within the fiction and then had meta themes. The realization of ideas is a meta theme that we can apply to all of our lives.

“With the Catalyst Prime universe, I don’t want to say it’s meta but the themes are those which I feel are universal and specific to certain experiences. When you talk about the idea that different books have different goals, that much is certain, and I think that’s the way it should be. The X-Men family of books should have a different goal than the Avengers family of books. Justice League and Justice Society should have two clear and distinct visions. So that’s one thing that we’ve been certain about doing in forging this universe: clarity on what each book is about at its core. What are the themes? What do we want to tackle here within the superpowers and the technology and the conditions of life in this Earth? And that’s part of the fun.”

Look for the Catalyst Prime one-shot on Free Comic Book Day in May!