Interview: Cavan Scott on Doctor Who – “The Lost Angel”

A writer for several media tie-in properties, including Doctor Who, Vikings, Star Wars, and The Penguins of Madagascar, Cavan Scott is certainly familiar with exploring new dimensions to familiar characters and stories. In The Lost Angel, the first of four audio books co-written with George Mann and release through BBC Audio, Scott tackles the current, twelfth incarnation of the title hero of Doctor Who (currently played by Peter Capaldi). In this story, the Doctor faces a familiar enemy and makes new friends. 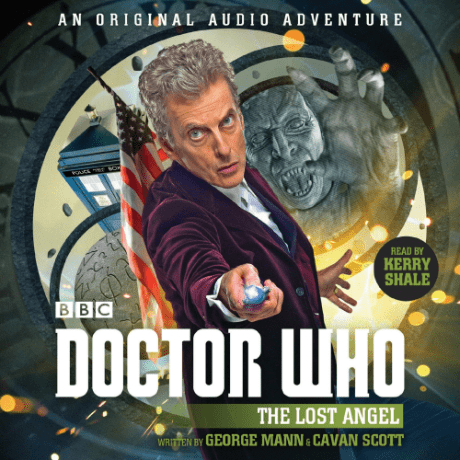 ALAN KISTLER: “Usually there are books and then they get adapted into audio books. This is skipping a step. There’s no physical copy of The Lost Angel to read, it’s directly released as an audio book. What can you tell us about it?

CAVAN SCOTT: Right, it’s an odd thing to write a book that’s only ever going to be read outloud by one person. This is coming from BBC Audio. Where you’ve got Big Finish who do full cast audio dramas that take place all over the universe of Doctor Who – and I’ve done a lot of work with them over the years – this is more of a traditional audio book format. This is book one of a four part series that I’ve co-written with someone I collaborate with quite a lot, George Mann. We came up with an arc for the whole series and we’ve co-written the first and last books, and the two in-between we each handle individually. So The Lost Angel introduces two new companions, Alex and Brandon Yow, and they’ll carry on through the rest of this audio book series.

KISTLER: “And for this first story you’ve brought back the Weeping Angels, who are interesting and tricky monsters. They freeze into statues when you see them, so any attack has to be unseen. They don’t really give speeches, with the exception of one story where they spoke through a proxy. They don’t have plans to conquer the universe, they basically just sneak up on you from behind and feed.”

SCOTT: “Yeah, the angels don’t physically do a lot. What they actually do is quite limited, so it’s amazing we’ve gotten so many stories out of them. When you do bring them back, you have to do something different or take a different view of them rather than just telling the same story over and over again. That was part of the challenge. We haven’t really had a Twelfth Doctor Weeping Angel story. And also by doing a prose story, it means that we can – to a certain extent –  get into the mind of a Weeping Angel. We didn’t think we would get away with it. When we wrote a couple of passages inside the mind of a Weeping Angel, we thought we’d be asked to take them out but they’re still in there.

KISTLER: “When approaching popular villains and monsters, I always find it interesting to see how creators strike that balance between exploring new dimensions to them and also making sure we don’t get too familiar with them. Because if we get too familiar with a monster, we stop fearing it as much. In The Lost Angel, you delve into the mind of an angel but instead of getting us to understand it as a more human villain, you emphasize that this is not a human being at all and does not have human thoughts or morality.

SCOTT: “Exactly, there’s not a human there. You’re dealing with them as an animal. They are pure instinct. And they are really fun to play with. I’ve written Doctor Who monsters in the past – Daleks, Sontarans, Cybermen – and they are quite human in a lot of ways because they’re all based on different parts of humanity. That’s what makes them monstrous. They are recognizable to us and that’s what makes them scary. But the Weeping Angels are pure instinct. They’re one of the most alien aliens in Doctor Who.”

KISTLER: “The Doctor parted ways with his last traveling companion Clara at the end of the last season and is still traveling without a companion when we saw him next in the latest Christmas special. We know the next season premiere will introduce new companion Bill, but your story takes place before then, with not one but two new companions being introduced: photojournalist Alex Yow and her brother Brandon.”

SCOTT: “Right. When this comes out, we’re mid-companions. Clara’s gone, Bill’s not here yet. The Eleventh and Twelfth Doctors have these nice gaps in their stories that it’s much easier to make tie-in adventures. I know some people don’t like that. Some people didn’t like Clara had a life and the Doctor came in and out of it. But it does mean the Doctor can go away and do other things without you worrying he’s being unfaithful to a companion. He’s a man who doesn’t sleep much, he’s going to go off and do other stuff. Just popping around the corner for us is a little trip, for the Doctor it could be ten years he’s gone and then he’s back and ready to pick up just where he left off. With the Ninth and Tenth Doctor it’s a bit more difficult. The Ninth Doctor comics I’m doing, it’s been good to fill in the gap between when Jack Harkness joined the TARDIS team at the end of the episode ‘The Doctor Dances’ and when we see him in the next episode ‘Boom Town’ where he’s part of the team now, he’s less broken, they all trust each other, they’ve clearly done many things together in between those two episodes.

“This year, while there’s no Doctor Who on telly, every version of Doctor Who in other media has introduced new companions. I’ve really enjoyed that this year. So it meant we could do something different. We had to ask how will this companion be different to Clara and how will they be different to Bill as well, on what little we know of Bill. And we decided to go back to a TARDIS team because seeing the Twelfth Doctor in a team situation is fun. He’s not the most easy, happy-go-lucky person. And we haven’t done a brother-sister team on the TARDIS, not since John and Gillian (the ‘other grandchildren’) in the original comic strips. Alex and Brandon are not in a relationship, they’re family members. When you have a sibling team, you have one who’s perhaps the more protective, the one who tries to get in trouble more, and then you add in the Doctor.

KISTLER: “The Twelfth Doctor grows a lot from his first appearance to the next season premiere, and grew more afterward. Now you get to play with a version of him who’s a little softer, a little more open to friendship, and – to me – a little more rock and roll mad scientist. He’s almost got a little bit of Doc Brown from Back to the Future.”

SCOTT: “Yeah, he’s gone into his rock and roll rebellion phase. I love the Twelfth Doctor. I love how he’s gone from quite a horrible man at times but now is softening. We didn’t want it to be a case where the Doctor is lumbered with companions, we did want to give him companions where he’d like to be around them for more than five minutes. The other thing we can play with is that traveling with the Doctor isn’t for everyone. We’ll see how these two will embrace or perhaps not embrace TARDIS life. Back in 2005, we saw the mini-arc with Adam and that not everyone is cut out to be a companion. And that’s great to play with, to get into the head of a companion and understand what they’re thinking and why they’re thinking it. I think it’s fun.”

Look for The Lost Angel via Amazon and Audible.com.