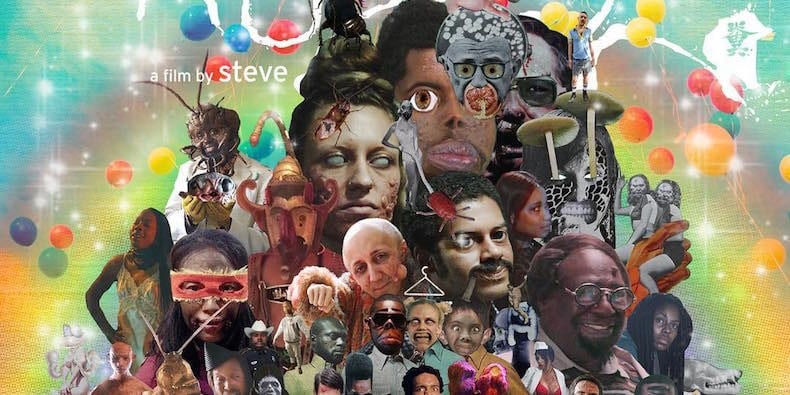 After premiering at the Sundance Film Festival this past year, KUSO has been billed as “the grossest movie ever made” with audience members reportedly vomiting and / or leaving the theater during a screening. The gross-out art flick is now streaming exclusively on the new horror centric movie app Shudder, which is like Netflix – if Netflix were programmed only by the likes of John Waters and Quentin Tarantino.  While some folks would stay clear of a movie with such a lurid reputation, I gladly signed up for a free Shudder trial membership to see if Kuso lived up to the hype! According to its distributor, Kuso is a series of vignettes following survivors of a horrible earthquake in Los Angeles – as seen through a makeshift network of discarded televisions. How much of even that tepid plot description actually ends up on screen, I’m not completely sure.  Any semblance of a cohesive narrative is sporadic. The best bet for viewers is to try and not hurt your brain attempting to follow a story but rather think of it as an art project from a talented yet disturbed visual artist. My friend, who I talked into watching Kuso with me, said he thought the movie felt as if the director was trying to make a series of inside jokes that the audience wasn’t in on. Although I’m not sure anyone else was in on it either. Kuso was helmed by a first-time director credited only as “Steve.” Steve is actually Steve Ellison AKA Los Angeles-based DJ – musician Flying Lotus. It seems that Ellison set out to make a film that would push some buttons, but to answer the question if Kuso “is the grossest film ever made” really depends on your definition of the word gross. There are plenty of gaping orifices, bodily fluids, open wounds, genitalia and disturbing, scatological visuals throughout the film. All of the human characters in Kuso are covered in grotesque boils; enough to keep the infamous YouTube star, Dr. Pimple Popper busy for a long, long time. The best way I can think to describe Kuso to someone who hasn’t seen it is “Mulholland Drive meets The Toxic Avenger.” Kuso is like if David Lynch directed a movie featuring the fantastical body horror creatures of David Cronenberg and then Troma’s Lloyd Kaufman came in and puked all over the whole thing. If that sounds like something that might interest you, then you should watch Kuso. Back in the day VHS horror movie box cover art would promise lots of bizarre creatures disemboweling naked ladies while gushing buckets of blood and gore. These B-movie, grindhouse films were normally a huge disappointment, so it is a strange time we live in where filmmakers are trying to actually live up to the “box cover promise.”  In the past few years, twisted gems like The Greasy Strangler, the shocking A Serbian Film, and the French cannibal film, Raw, have pushed the envelope and the barf bag. And let’s not forget this is the decade where the phrase “The Human Centipede” is a quick cultural reference punchline on The Tonight Show. So I have to give credit to Kuso for at least trying to be in that company, although to some it may come off that the filmmakers are just trying too hard. One of the main problems with Kuso is that we don’t follow any one story line long enough to care about all the weirdness. After a musical number that touches on the whole LA earthquake backstory, we start out with a young couple who are into a choking fetish (in this film that is the most normal thing happening), then move to a boil-infested boy who leaves his makeshift school and stern teacher (Anders Holm) to visit a poop eating monster at the swamp near his house, which may or may not be a gateway to another dimension (open to interpretation). A starving woman eating bugs and crawls desperately around until she falls down a shaft attempting to find her baby so she can eat it for food. Each of these setups could have been expanded on, in the world of Kuso, to become the full feature. One of the most interesting threads revolves around a woman who lives with two “transdimensional” roommates (one played by comedian Hannibal Buress) and discovers she has been impregnated by her date rapist (Tim Heidecker) – only to seek an abortion at a “Coathanger Clinic.” It is there we meet a man who is trying to be cured of his phobia of breasts. The treatment for his condition leads to a scene that I am guessing was the impetus for Sundance viewers losing their lunch. At this clinic, the “Doctor” (played by funk legend George Clinton) drops his trousers to excrete a large bug that lives in his butt and cures people of their ailments. (Now there is a healthcare plan!)

There are some genuine laugh-out-loud moments (I should say, depending on how sick a sense of humor you have) and Kuso may be enjoyable for the most expert level midnight movie lover. It is totally NOT for the rest of uninfected humanity. If you do decide to watch and make it all the way to the end of the movie you will be rewarded with what I believe IS possibly one of the most disturbing, and truly weirdest scenes ever committed to film. Have you seen Kuso? What did you think?!