On Hydra, Captain America and Magneto 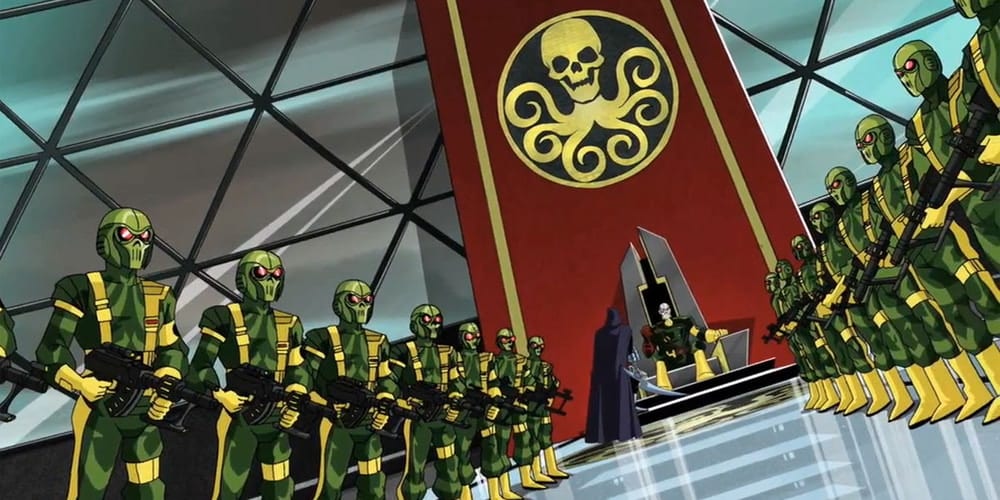 The evil organization Hydra has been on the rise in some Marvel Comics recently, mainly in stories by Nick Spencer. Now Marvel has released cover images from the upcoming Secret Empire crossover where many major super-villains will be working for or alongside Hydra to finally take over the entire Earth. One such villain depicted is Magneto, which has made many fans ask “What the Hell?” Magneto, of course, is a Jewish holocaust survivor, whereas Hydra is, at its core, the Nazi party. When Stan Lee, Jack Kirby, Steve Ditko and others created the true Marvel Comics universe in the 1960s, it was quickly decided that Captain America worked best against fascist would-be conquerors such as the Nazi party. Since the Nazi party was defeated, a stand-in was created: Hydra. So technically, yes, they weren’t literally part of the original Nazi party. But they shared the beliefs and were designed to echo the Nazi party. They were Nazis in a different uniform, saying “Hail Hydra” instead of “Heil Hitler.”

The backstory was that the organization was suggested by the Red Skull (Hitler’s number two in the Marvel Universe) and led by Baron Strucker (a literal Nazi in the Marvel universe). Baron Strucker’s idea was that while Hitler’s Nazi Germany would fall, as he and others believed it soon would, the goals he and other Nazis fought for would live on and have another chance through Hydra. So yes, calling them Nazis is not incorrect or unwarranted.

“But wait, wasn’t that retconned later?”

Yes, but not THAT much. This kind of revision happens sometimes in comics. For instance, S.H.I.E.L.D. was later revealed to actually be not just an intelligence organization founded during the Cold War but actually the off-shoot of the “Brotherhood of the Shield,” a secret society that had existed since at least the days of Ancient Egypt. Similarly, later comics expanded that a secret organization called “the Beast” and then “the Thule” predated the Nazi party, a group that then joined with Hitler’s regime for a while and was absorbed into Baron Strucker’s new Hydra organization. So there was a predecessor group to Hydra that involved evil people who predated the term “Nazi.” Does this mean it is wrong to call Hydra members “Nazis”?

First, the name is not an official organization name. No one in Hitler’s employ or government called themselves a Nazi. That is a name other people gave them. Arguing that you have to be a literal “card-carrying Nazi” before anyone can call you that is wrong when there were literally no such cards or documents carried by any Nazi. Secondly, this evil Beast/Thule group members joined up with Hitler not by accident but because they decided, “Hey, this Hitler guy’s goals are a lot like what we want.” Thirdly, the comics explained that this group was absorbed into Baron Strucker’s Hydra organization and accepted his leadership and new goals. That means they followed a Nazi who, under the instructions of another Nazi (the Skull), wanted to make sure the Nazi dream survived into the next generation. So yeah… you can call them Nazis.

Last year, in stories by Nick Spencer, dark forces warped time and space so that Captain America’s history (and thus his mind) would be corrupted. This child of Irish immigrants who was made into a super-soldier thanks to a Jewish German scientist was now, as far as he and history were concerned, always a secret Hydra spy who (for some reason) was still just biding his time to strike. At best, this is a shallow plot twist, one that by its very nature lets us know it will be corrected later with little if any lasting effect beyond the occasional “Oh God, what have I done?” At worst, it’s cheap shock value that dismisses what Captain America means in a world that still suffers from bigotry and anti-semitism, a world where no, actually, it is not shocking for a white man in power to turn out to be a bad guy. So Marvel fans already have reason to be angry at Marvel and Nick Spencer. We’ve had Hydra Captain America for a long time now and the story has not offered any new insight into the character or any redeeming value, it’s just been issue after issue of “look how his history is different now because he’s evil.” So when you imply Magneto, a Jewish Holocaust survivor who has been defined by the trauma of Auschwitz for decades, is also joining Hydra, you can’t be surprised at the anger. Sadly, people who have criticized and questioned this, even people who first point out that they are fans of Spencer’s work and are willing to give him the benefit of a doubt but just want to express hurt feelings, have often been trolled by him on Twitter in response.

Of course, some will point out that an interesting thing about Magneto is that he is a survivor of trauma who then goes on to repeat many of the methods and abuses of his oppressors. That is correct. While he does seem to have some complex emotions and moments of humanity, Magneto grows to hate people for biology rather than their actions or character, has argued that his people are a new master race who deserve to take over and that he, by sheer chance, needs to be the ruler of them all. And he has been willing to fight and nearly kill teenagers who oppose him, even if they are mutants, because if you don’t agree with him then you are an enemy. This is all part of what makes him a complex character and saying oh, no, he’s becoming a Nazi in so many ways, is interesting and tragic. But if you have him join Hydra, there is no more metaphor. He’s just joining a Nazi organization, which is both lazy and insulting.

If the cover is misleading and just meant to get people riled up, that’s bad too. Readers can deal with being teased, but if you flat out lie to them or show them that you’re interested in making them feel bad in hopes for money rather than engendering loyalty, many are going to head to the other publishers that don’t make them feel punished for being a fan or at risk for being trolled by the writer if they have a reaction other than “cool!”