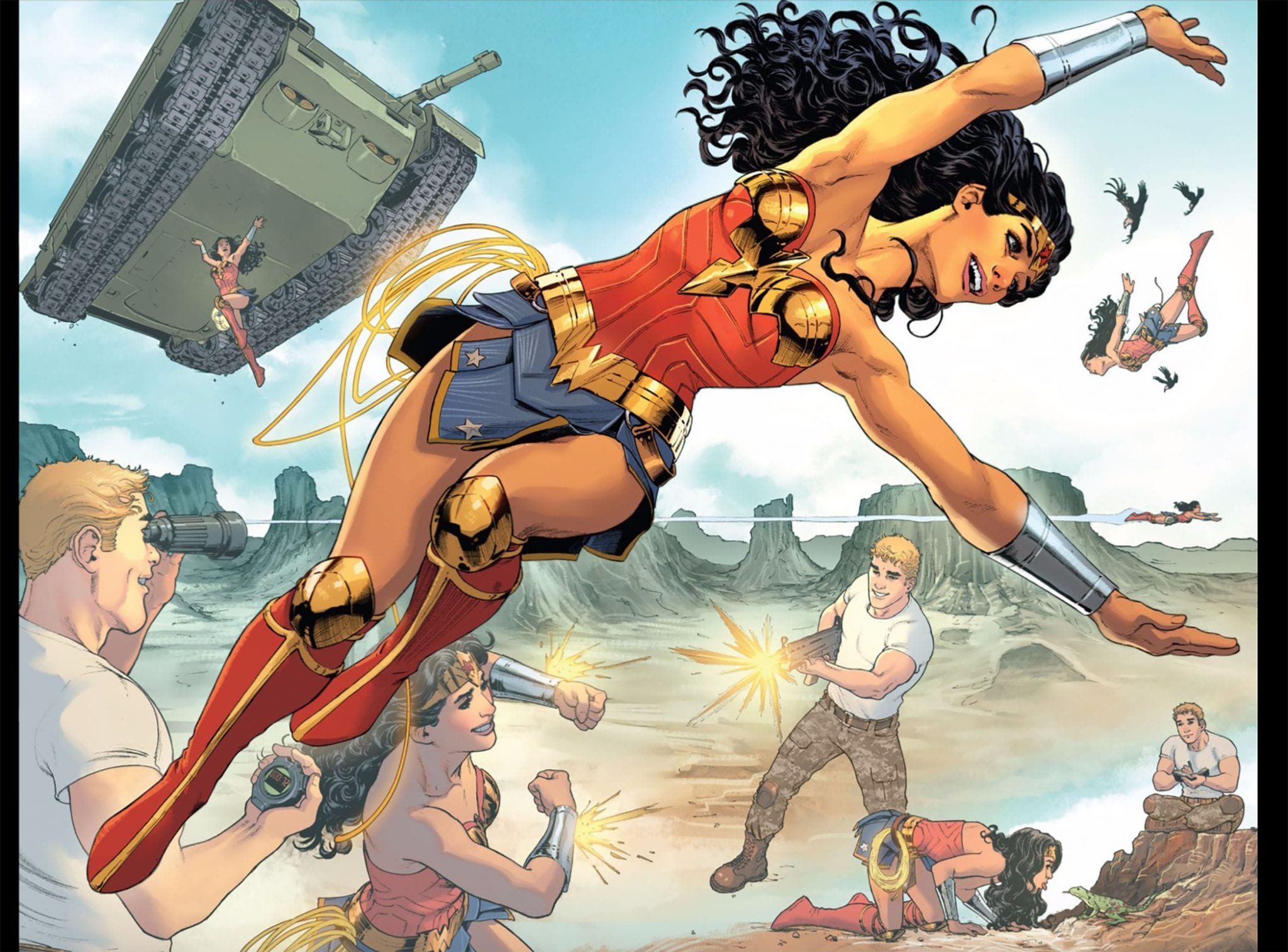 Superheroes exist in a realm that seems to lie between myth, social commentary, and folk tale. There’s often something primal to them. Some of them even literally bring in elements and characters from mythology. In Marvel Comics, the Norse god Thor is a long-lived alien from another dimension who fights alongside the Avengers. In DC Comics, Batman has occasionally teamed up with Etrigan, a demon from Hell, while Superman has met Merlin the magician. The gods of Olympus have always been part of Wonder Woman’s mythos, and sometimes show up so regularly and casually in the stories that they might as well just be other superheroes themselves. But now, with the new Wonder Woman story “Year One” by Greg Rucka and Nicola Scott, the Olympians are being shown in a different light than in previous stories and they’re regaining a sense of grandeur. When creator William Moulton Marston first revealed the origin of his hero Diana, readers learned that she is born of magic and love rather than the union of two human parents. On Paradise Island, home of the legendary Amazons, Queen Hyppolyta longs for a child and sculpts one. The Olympians sympathize and change the clay sculpture into a living, human baby, a baby who grows up to be one of the greatest heroes of DC Comics. As an adult, Diana becomes Wonder Woman and often fights the god of war Ares (originally called by his Roman name Mars in the early comics). The other gods were kept largely at a distance. We knew that they existed, but Wonder Woman largely acted on her own. In the 1980s, Wonder Woman’s story was revised and now the Olympians were a major part of the supporting cast. They were real characters who had vested interests in the affairs of humanity and often influenced things or discussed events occurring on Earth. When Diana is born, several of them directly give her gifts (accounting for her powers) and later they often visit her and speak with her. They even join in on conflicts, whether it’s different pantheons facing off in the crossover War of the Gods or Ares’ children possessing the inmates of Arkham Asylum in the story “Gods of Gotham.”

We see in these stories that Wonder Woman respects them as otherworldy beings with power that dwarfs her own, but she’s also not as deferential to them as one might expect an inhabitant of ancient Greece would be if Hermes became tangible and dropped by for a visit. When Ares shows up as a recurring enemy, he is a force to be reckoned with but Diana doesn’t seem more impressed with his presence and status than a lot of other major villains she has to save Earth from.

That approach can definitely work and there’s a lot of fun to be had. During Greg Rucka’s first run as writer on the series Wonder Woman, he grounded the Olympians and showed an Olympus with modern technology and fashion as the gods played political games with each other. This time around, Greg Rucka and artist Nicola Scott are in the position of rebuilding Wonder Woman’s mythology from the ground up. The “Year One” story brings in a new version of Diana, her upbringing, how her powers arrive, and what brings her to leave her island and explore the “Patriarch’s world” that is full of war, prejudice and sexism. While doing all this, Rucka has Diana refer to the Olympians not as gods who control her fate and that of everyone on Earth, but as her “patrons” who act as guides at time and will protect in subtle ways from afar. In this version of Diana getting her super-powers, the gods do not show up as physical beings who declare their gifts in booming voices while summoning down energy and lightning. Instead, Diana sees animals appear before her and understands that each of these is an avatar of a patron. She feels their message in her heart and mind rather than through words. They leave and she knows she now has superpowerful “gifts” but what they are exactly and how to use them is still something she must explore on her own.

By keeping the Olympians more aloof and mysterious, they are no longer grounded as tangible characters. And in this case, that is for the better. They now have a mysticism about them again. We now see them not as aliens but as being who truly belong to another world, another level of reality. Along with this, it makes Ares’ later appearance all the more dramatic. When Ares later shows up (as he must) to face Diana, and he appears in human form, wearing armor and using a human voice, it almost seems wrong. It implies he’s breaking a rule and forcing himself into our world and plane of reality whereas the rest of Olympus is careful and respectful of the boundary. His power and threat are suddenly greater than they’ve seemed in comics for many years.

When you think about it, what Rucka and Scott have done is to remember that classic rule of storytelling: show, don’t tell. The Olympians are once more majestic and mysterious rather than aliens in robes, and I’m interested to see where things go from here. Be sure to check out Wonder Woman and the upcoming trade collection of Wonder Woman: Year One to see for yourself.