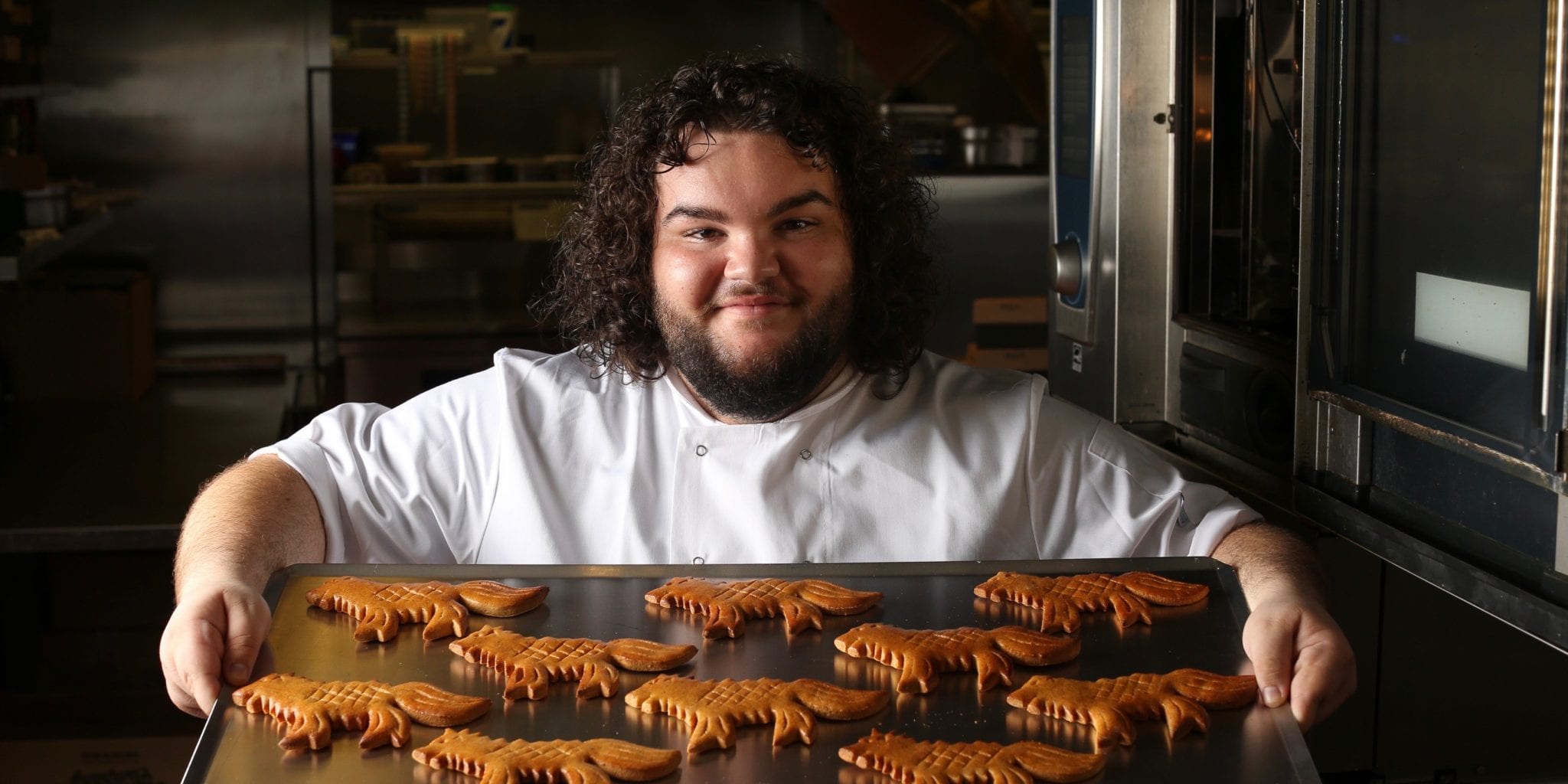 Nothing goes together better with a binge-watching marathon of your favorite show than ordering piles of delicious food to start binge-eating along with it. Sometimes I even like to match the type of food I order with whatever I’m devouring on screen. Checking out the reboot of Ghost in The Shell? Time to order some sushi and a teriyaki bowl. Re-watching all six seasons of The Sopranos? Dominick’s delivers the best chicken parm! Reliving your childhood with the Pee-Wee’s Playhouse complete series special edition… I guess a talking soup bowl? However, now you can even leave the comfy confines of your couch and favorite streaming device and still enjoy geek culture/food combos at a variety of eateries around the world. Here are a few pop-themed restaurants to whet your appetite! First of all, he is known to the world as “Hot Pie”- so it is not surprising that Game of Thrones actor Ben Hawkey is getting into the bakery business.  On the show, Hot Pie was known for his Direwolf loaves, baking a series of wolf-shaped batches for the House of Stark, and Brienne of Tarth. So now for a limited time starting at the end of July, users of the British food delivery app Deliveroo can order Hawkey’s real life Direwolf loaves from his store: “You Know Nothing John Dough.” Game of Thrones puns aside they sound delicious, made with whole wheat, corn bread and orange zest, to be served warm with butter. Might be a good Hors d’oeuvre at your red wedding! While it is no “Mimi’s Haberdashery,” a Quentin Tarantino-themed bar in Berlin features dozens of posters and memorabilia from the legendary filmmaker. The bar plays Tarantino films on a loop and the décor would make Vincent Vega feel right at home taking the boss’s wife out on the town. In 2009 while shooting Inglorious Basterds in Germany, locals informed Tarantino of the bar that bears his name. The Oscar winning director had to see it for himself and actually visited the bar unannounced. In an interview he later recalled the strange moment he entered the establishment dedicated to his life’s work, saying: “We showed up, and the owner saw me through the window, stepping out of the car. He was really cool. He just stood in the middle of the room, and when I stepped through the door, he held out his hand and said, ‘Welcome to your bar.'” While Universal Studios itself has created several Wizarding World of Harry Potter attractions around the globe for muggles to get the full theme park experience, drinking $12 butterbeer before making it magically disappear on a roller-coaster, there are also some more off-brand tributes to the franchise. One such Potter themed eatery is Pasta Wiz in Brooklyn, NY… because when I think of British wizards, I think of pasta! Pata Wiz’s theme seems to center on making patrons feel like they are eating in the iconic dining hall at Hogwarts. Luckily Lord Voldermort will have a hard time sneezing in the marinara sauce. It makes sense that an online multiplayer game would have its own theme restaurant; back in the day MPG parties were all the rage, but the delicacies were more relegated to stale pizza and Mountain Dew.  Now “Demacia”– in Chongqing, China – named after the one of the main fictional locations of the game, is dedicated to all things League of Legends. Patrons are greeted by staff in full costume, such as a Ezreal waiter and can even log on to play the game for a chance to win discounted food.

Beetle House, The Tim Burton Themed Restaurant Will Make You Sing Day-O! At the Dinner Table With locations in both New York and Los Angeles, Beetle House, the Tim Burton-themed restaurant is sure to tickle the taste buds of even the melancholiest of moviegoers. While some eateries throw out a few puns to satisfy their theme, there is plenty of Johnny Depp character-inspired cosplay happening each night including Edward Scissor Hands and Willy Wonka. Don’t fear though, the menu also offers actual “Beetle Juice” cocktails and “Sweeney’s Beef”- yum! Hello Kitty Restaurant Takes Merchandising to The Next Level

When I discovered that there was a Hello Kitty-themed restaurant, my first thought was; wait, what is Hello Kitty? The little Japanese cartoon figure has been part of our lives for so long that I forgot where it actually came from. It turns out that the ever-present figure is in fact not a cat, but a little girl whose name is “Kitty”- and is more mascot than anything. It’s like if Mickey Mouse were the iconic Disney’s Mickey Mouse BEFORE he appeared in animations. Weird. The 7-billion-dollar franchise has had TV shows, books and appeared on school supplies, backpacks and clothing. So, no surprise that the company that owns Hello Kitty went ahead and made a Hello Kitty Dreams restaurant in a high-end shopping mall in Beijing, China. There, patrons can dine on food that comes in the shape of their favorite character. You can eat Hello Kitty! Thankfully the Tim Burton restaurant didn’t start making Corpse Bride shaped pudding.

What is the most interesting theme restaurant you have ever been to?