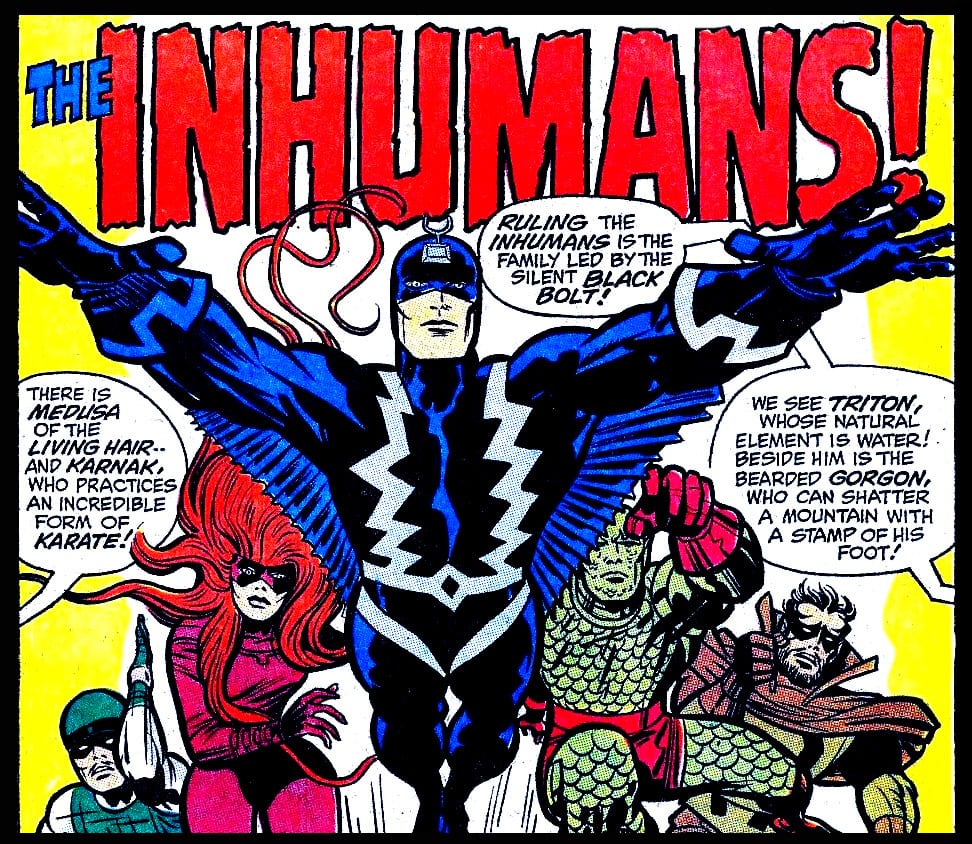 Stan Buck didn’t win a lot of fans over when he took over as showrunner for the series Dexter, and his co-writing the series finale didn’t help considering how widely hated that episode became. His turn as showrunner on Netflix’s Iron Fist resulted in a show that even many die hard Marvel Studios fans have found lacking in some way or another, particularly compared to the praise and critical acclaim the other shows have garnered either do to story, action scenes, visuals or all of the above. So it’s natural that some people are now nervous about the fact that he’s the showrunner on Marvel’s upcoming Inhumans series. Earlier this week, Marvel Studios released this photo of the Inhumans cast to Entertainment Weekly. First, who are the Inhumans?

Introduced in the 1960s and created by Jack Kirby and Stan Lee, the Inhumans are a sub-race of humans, genetically different in several ways and secretly living on Earth in their hidden city of Attilan, a city which in later comics relocated to the surface of the moon. The royals and certain others of the Inhumans, when deemed genetically right for the process, are exposed to the gasses and mists of Terrigen crystals when they reach adolescence. This “Terrigenesis” unlocks superhuman potential in them, granting great powers or freakish mutations or both. Usually, the royal family of Inhumans has been the focus of stories, but in the past decade Marvel has revealed that certain members of Inhuman society mixed with the human race in earlier centuries, meaning there are now seemingly ordinary humans who will gain super-powers if exposed to Terrigen. Since Marvel Studios cannot use X-Men characters or “mutant” humans in their TV shows and movies, due to Fox Studios having the rights to use such characters in those media, the existence of Inhumans has been a solution, allowing random people with powers and new heroes and villains to be introduced without having to think of unique origin stories for each of them.

This is not a bad wardrobe for the cast and it’s clear by the designs who is supposed to be who.We have, from left to right, the royals of the Inhuman society: Gorgon, Karnak, King Black Bolt, Queen Medusa, Crystal, and Maximus. But the Inhumans represent just how weird the Marvel Comic universe can go. They, pure Inhumans such as the royal family, are not human beings biologically nor do they grow up in human societies. They are almost aliens living among us, except that they too are native to Earth, with their own style, fashion, technology and customs. Jack Kirby’s geometric designs and embrace of colors is a major part of their society. These outfits seem fine, but rather grounded and a bit muted from the high volume strangeness of the comics. If any Marvel characters should be allowed to wear true costumes, outfits that scream unapologetically “we are not ashamed to be based on comic books,” it’s the Inhumans. On top of that, Stan Buck’s show will not be showcasing the royal family as inhabitants of a science-fiction city that more resembles Krypton than New York. Instead, they will be living among normal humans in Hawaii. All of this, especially after the critical failure of Iron Fist, has made several Marvel fans nervous about what to expect from showrunner Stan Buck.