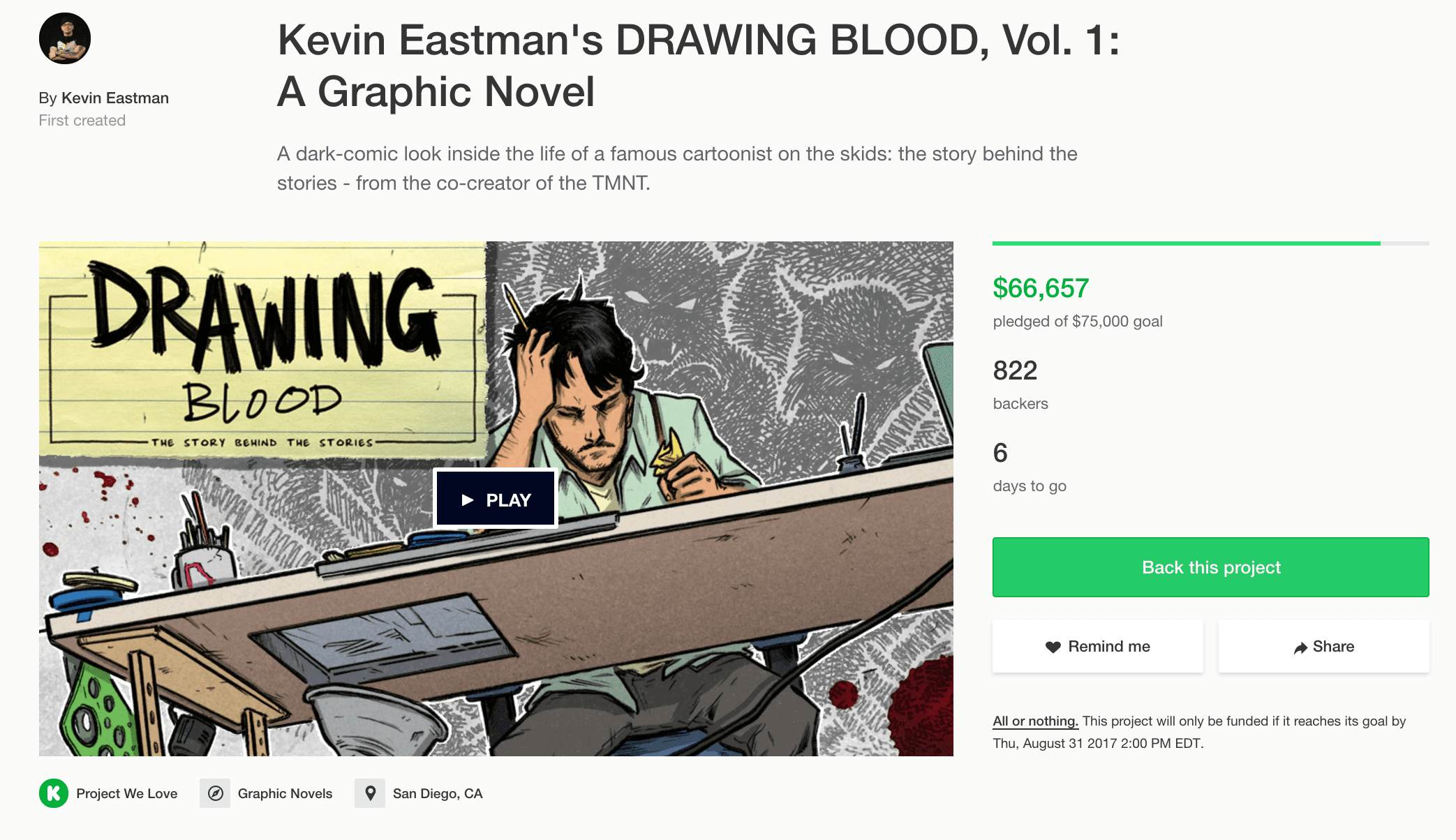 Kevin Eastman, David Avallone, and Ben Bishop along with Troy Little, Brittany Peer and Taylor Esposito are working on a “dramedy” (dark-comedy-drama) based on the “totally fictional, true story” of cartoonist, Shane Bookman, whose world exploded with the unanticipated popularity of Radically Rearranged Ronin Ragdolls, about a trio of ninja-like, mutant felines inspired by the Teenage Mutant Ninja Turtles franchise that Eastman co-created some 34 years ago.

As is the case sometimes when youth, naiveté, and success conspire to wreck things, Shane Bookman’s world eventually imploded, which Drawing Blood chronicles. This 4 chapter, 112-page graphic novel is the vehicle the creative team is using to bring together the crazy industry stories they’ve heard of or have lived through themselves, inside and outside the comic industry, throughout the years.

In an interview with Nerd For A Living (N4AL) podcast host, Adron Buske, Eastman describes Drawing Blood as “a dash of Breaking Bad, a dash of Spinal Tap, a dash of Amadeus…and a dash of Comic Book Confidential,” which sounds like a pretty tasty amalgamation to me. While the Drawing Blood team could have taken it to IDW to get published, they’re taking it to the fans in the form of a Kickstarter campaign. For Eastman, the act of bringing this project straight to the fans is a throwback to the period when he and Peter Laird first created TMNT and released it into the wild, sans publishers and editors.

In that N4AL interview, Eastman said that he and Drawing Blood co-creator, David Avallone, wanted to “go back to the basics” and “strip it down to a creative team working in a room and reaching out for the support of the fans.”

A successful Kickstarter campaign will allow this pedigreed team to immerse themselves in that grassroots, indie aura while establishing a baseline of support and de-risking their efforts to some degree.

The campaign is currently near 90% of goal with just 6 days left. I’m thinking with my personal network of about two dozen people (bots notwithstanding), this very post could ultimately be responsible for tipping the campaign into the black. Fingers crossed for a successful Kickstarter. I wanna know what happens to Books!

Update: The Drawing Blood Kickstarter campaign reached its goal and now the push is on for their stretch goal so check out the campaign before it ends.