Review: Annabelle: Creation Will Possess Audiences With A Fear Of Dolls 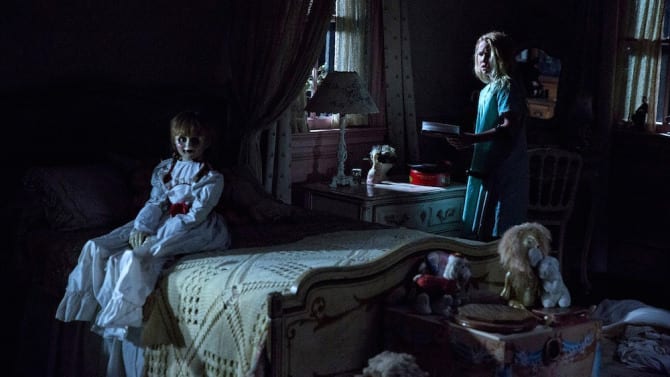 It’s the second spin-off film to The Conjuring series and a direct prequel of 2014’s Annabelle. So, if you need to catch up on exactly how this all fits together, you can read my series recap to prepare yourself for Creation here. This film actually takes place before the events of the last Annabelle movie. At this point in a long running horror franchise, fans can normally expect a huge drop off in production value and overall quality in content. The original team sold the rights long ago and the studio is looking to cash in! The good news is that is not the case with this latest entry. Director David Sandberg (Lights Out) dolls up the franchise with fresh scares. In fact, it might be one of the best of the series overall. We meet a happy family, The Mullins in rural 1940’s western United States. Mr. Mullins (Anthony LaPaglia) is a doll maker who crafts a decidedly creepy doll.  Despite his choice in doll design, business is booming and a merchant in town has even placed an order for several. However, the good times end soon as on the way home from church one Sunday while the father is fixing a tire, the Mullin’s young daughter “Bee” is struck by a car on the side of the road and killed.

Twelve years later, a bus full of misplaced orphan girls and their nun, Sister Charlotte (Stephanie Sigman), are headed down the same road to live in the large house with the Mullins who have graciously invited them to stay there until they can be adopted. Mrs. Mullins (Miranda Otto) is now bedridden and her status is a source of creepy speculation for the girls. One night two of the orphans swear that she was trying to scare them despite Mr. Mullins claiming his wife hasn’t been out of bed in years.

Understandably the couple are not the same happy people they were before the loss of their daughter, and Mr. Mullins frightens the curious Janice (Talitha Bateman), who is suffering from polio. When Janice attempts to go into the late Bee’s room he firmly tells her that the door is to remain locked and we firmly know what is going to happen next. Sure, enough Janice peeks
inside only to discover the strange Annabelle doll locked in a closet in the dead girl’s room, complete with a cross hanging inside and the walls covered in pages of the Bible. The doll does its creepy doll thing, moving on its own and appearing to open and shut doors.

I don’t know what kid would see all of that and decide to stick around but Janice and her best friend and confidant Linda (Lulu Wilson) are the quintessential horror movie characters that make you scream “don’t go in there!” or “why did they do that?!” Soon Janice is seeing the Mullin’s dead daughter Bee, however, if you have already seen the first Annabelle movie and are familiar with how things work in The Conjuring series (SPOILER) then we know that that is NOT really going to be their daughter… but as Loraine Warren would say “something evil that was NEVER human.”

While the demon lurking inside the doll is a spawn from hell intent on taking the soul of a young girl in order to assume human form, the man of the house is kind of a dick as well. While at first it seems altruistic that this man with a deceased daughter and a sickly wife would offer his large home to a group of young, orphan girls, something else more sinister is afoot. During the first act, I kept thinking: “He must KNOW”- and sure enough Mr. Mullins knows about the demon doll and decided to invite the girls to live with him anyway. Dick move, bro. Dick move.

This film stands on its own as a solid horror movie and its own story. If you have never seen The Conjuring or even the first Annabelle movie, don’t worry. Aside from reading my series recap, you will be all set. However, there are a few fun fanboy easter eggs sprinkled throughout.

One of the first The Conjuring references that jumped out at me was the use of crucifixes in this film. While any demon possession story is going to have a few, The Conjuring uses the crucifix prominently and often upside down. When the Mullins first walk into their house, the engravings on their front door have crosses coming from the bottom and top just like in the scene in The Conjuring 2 where crosses placed on the wall begin to turn upside down. The next tie-in to The Conjuring is through Sister Charlotte. We get a glimpse of her backstory when she is unpacking and Mr. Mullins sees a photo of her with several other nuns. She explains this was from her time overseas at a small convent in Rome and names the sisters present. However, Mr. Mullins points out another ghostly figure of a nun in the background she does not recognize. This is clearly the evil nun, the demon Valak from the last Conjuring film, which will also be making an appearance in an upcoming spinoff movie, The Nun, due out in 2018.

I also believe true fans of The Conjuring/ Annabelle series will probably guess a few plot points and the twist ending from a mile away. However, Annabelle: Creation does a great job of tying together the franchise while giving some great visual scares. I should also note I saw the film in a Dolby Cinema theater which had an incredible sound system, punching me in the chest with each sound effect. This only added to the foreboding feeling of dread the girls on screen were going through. Have you seen Annabelle: Creation? What did you think of the film?